Dessert wines are the most neglected wine category: they are hard to sell, according to many sales representatives and hospitality professionals. The problem is, in my opinion, that they are sold only as “dessert wines”, failing to underline the many possibilities of food pairings beside cakes and sweet treats at the end of the luscious meal.

Many passito wines are so complex and tridimensional that you can really play around with food pairings: cheeses, nuts, anchovies, fois gras, but also oysters or spicy and savoury preparations. The fact is that these kind of wines are not defined only by their sweetness, but by a wide range of aromatics. What matters is that the sweetness should be balances by the acidity and the structure to make them masterpieces worthy to buy: a good passito or vinsanto can give you an unforgettable sensorial experience, more than any other dry wine, it’s just a matter of balance.

You can find a passito wine in almost every Italian wine region.

Here I list 3 unusual examples that I particularly appreciate.

Vin Santo refers to a type of wine made from grapes that have been partially raisinated prior to pressing and that are matured in an oxidative environment. Historically, the name has been applied to a broad array of different wines from Italy, as well as the island of Santorini in the Aegean Sea. This style’s roots date back to classical antiquity and to the beginning of winemaking.

Traditionally, these wines have been most closely associated with Tuscany, an association whose history goes back to at least the 14th century, and probably even further back. Customarily, they are served with cantucci, the traditional almond biscotti of Tuscany, to welcome guests.

Vin Santo Occhio di Pernice (100% Sangiovese). Only the best Sangiovese grapes are carefully selected in the traditional wineries of Tuscany and processed according to traditional Tuscan precepts.

In September the grapes are hand-harvested in small containers (10 kg), brought to specific, well aerated rooms at the top floor and hung bunch by bunch for the natural drying process that last at least 4 months.

Once the optimal drying along with the desired sugar level is achieved, the fruit undergoes a long and gentle pressing that could last 24 hours. What is obtained is a precious rich must that after a static decanting is racked in the traditional small barrels made of oak and chestnut wood, called caratelli.

Following a long natural fermentation, after 5 years the wine is carefully racked again, decanted and bottled with no filtration to maintain the noble aromas and richness of this traditional, natural wine. 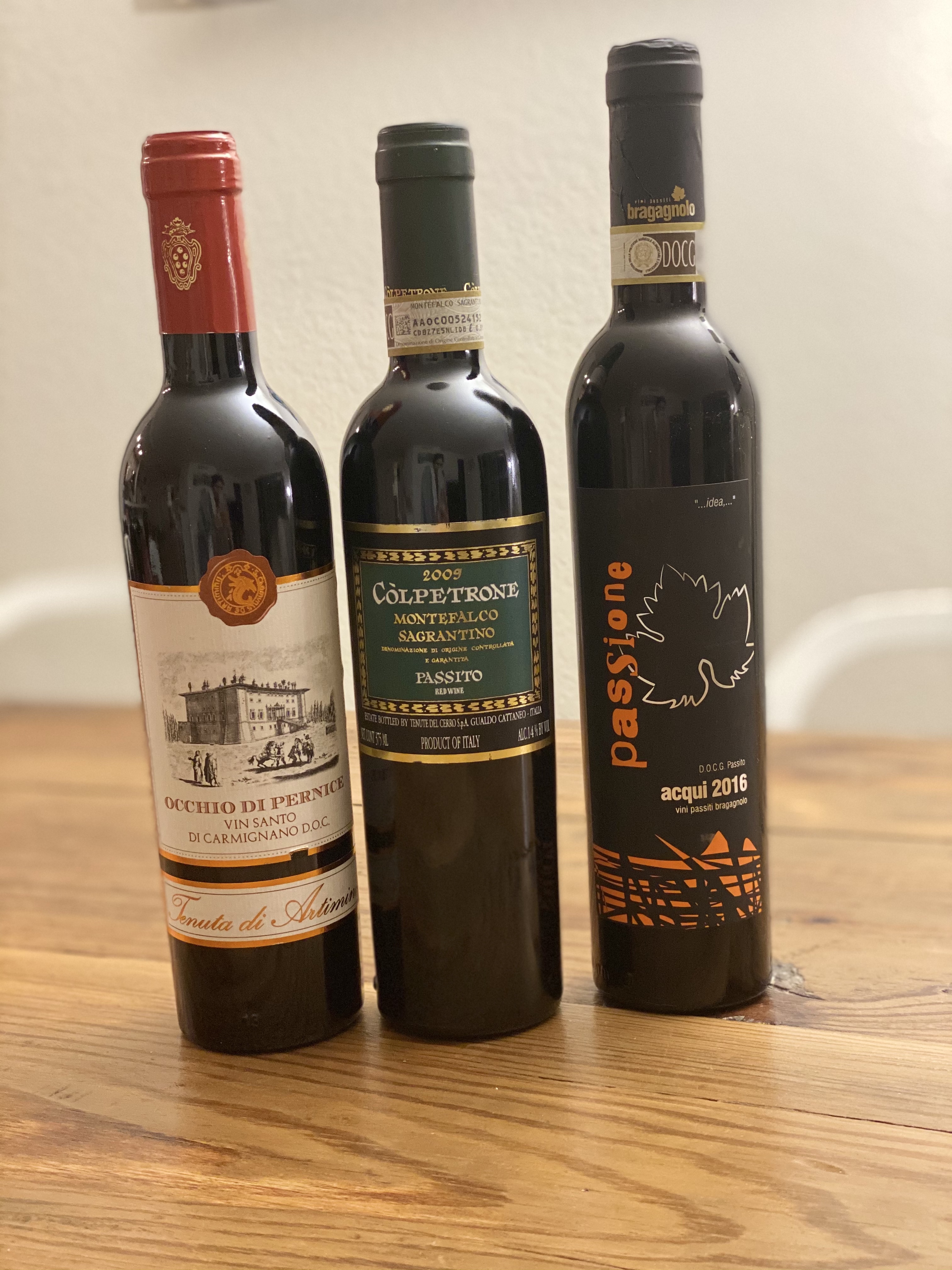 Sagrantino Passito is the traditional style of Sagrantino wines in the Montefalco area. Learn more about Sagrantino here.

This is kind of unique among Italian sweet wines, when well crafted: the red color is so rich it seems almost inky, the aroma evokes blackberries, dried fruits and cinnamon, the taste is particularly balanced. The dense tannins are delightfully balanced with the acidity and the sweetness, creating absolute harmony. The Sagrantino grapes are hung to dry on “graticci” to concentrate their flavors and sugars. In the past the Sagrantino Passito was the only wine produced from the Sagrantino varietal, and it was drunk during religious ceremonies in the villages of the Montefalco area.

This red dessert wine is produced on the same grapes as the semi-sparkling Brachetto d’Acqui DOCG.

The vines are centered around the town of Acqui and its municipality includes a hilly area in seven municipalities in the Alessandria province as well as some of Nizza Monferrato in the Asti province.

The grape used is Brachetto (97-100%) with the permitted addition of local, red varieties (0-3%). After harvesting, the grapes are drying outdoors before the pressing. The must thus becomes almost pure syrup and ferments for months.

The result is an overwhelming, extremely complex and concentrated wine with a wonderful aroma of roses and strawberries. The color is ruby red of medium intensity sometimes tending to garnet. The scent has a musky aroma, very delicate, characteristic of the Brachetto vine, sometimes with a hint of wood. Brachetto d’Acqui Passito DOCG is released on the market on October 1st of the year following the harvest.

It can be stored for 100 years but who wants to do that? However, Brachetto d’Acqui Passito DOC is rarely seen because it is quite difficult to produce and therefore unprofitable for farmers. Locally, it’s served chilled with creamy cakes, herbal cheese or with chocolate desserts.