Oltrepó pavese, what’s beyond the Pinot sparklings and the bulk wines

The Oltrepò Pavese wine region is one of Italy’s most neglected – many wine connoisseurs don’t even know about it. Located only 50 miles south of Milan, the area produces huge quantities of the pinot nero grape and in the past it has always been seen more as a viticulture area (mostly for mass production of cask wines and grapes) than as a specific wine region with a defined identity. That’s also why it is often neglected by tourists and wine lovers in favor of more renowned locations such as Tuscany and Piedmont, and as a result, is quiet, beautiful and authentic. And all to discover.

Come with me to learn what’s going on in Oltrepò pavese, among native varieties to be revamped and young winemakers looking for a new identity,  beyond the sparklings. 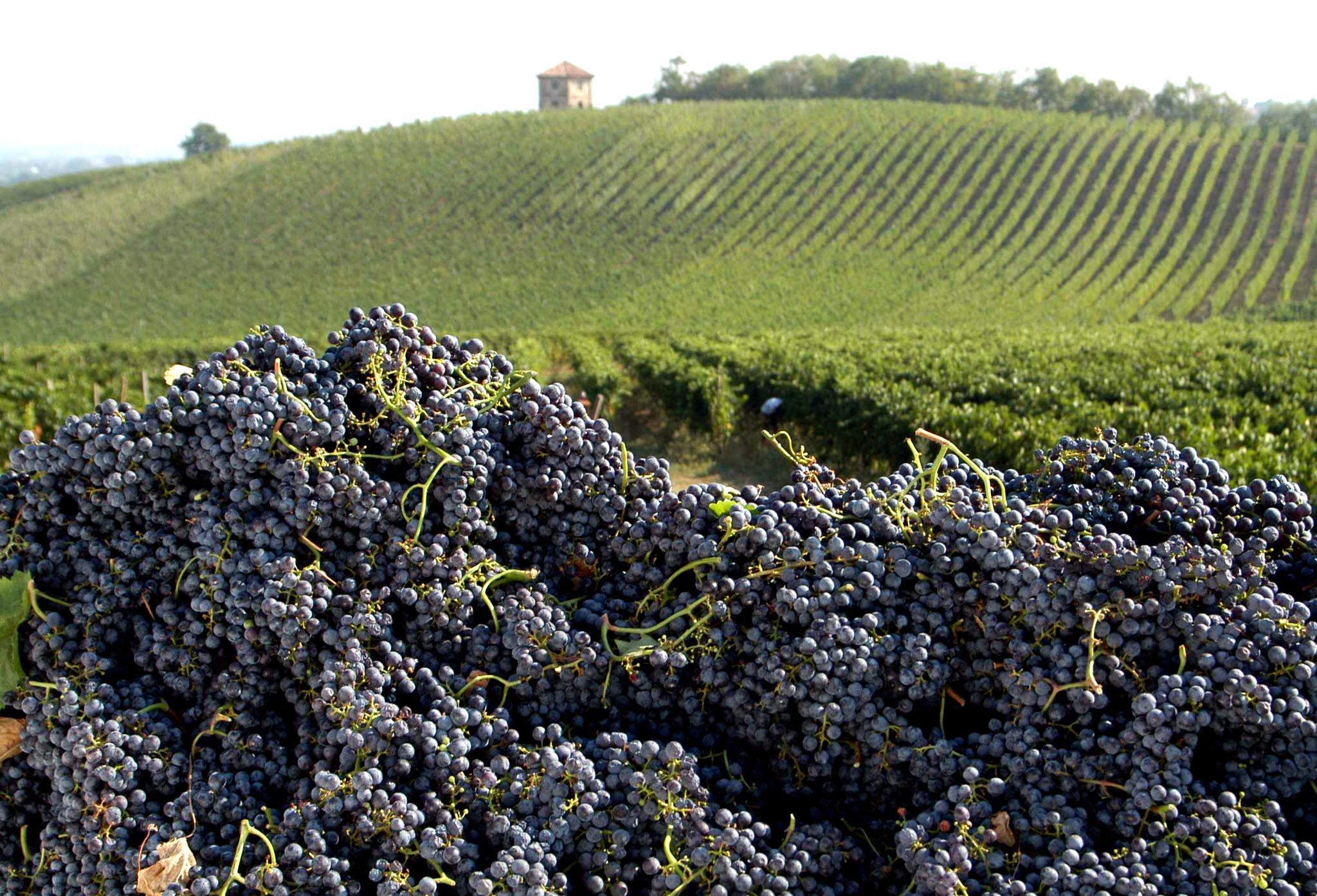 The name Oltrepò Pavese derives from the region’s position on ‘the other side’ (the South) of the Po, a river that dominates the large plain between the Alps and the Apennines of Northern Italy, the Pianura Padana. A little to the north of the Po lies the small historical city of Pavia (hence pavese) and bit further north still is the world-famous capital of finance, fashion and design, Milan. If Pavia and Milan lie in the plain, the Oltrepò is characterized by hills and mountains, making it ideal for the cultivation of grapes.

No surprise that in the 1800s this area was one of the most diverse from a viticulture point of view: in 1884 there were more than 225 native grape varieties planted in this huge Lombardy vineyard, so well suited for the vitis linifera cultivation. The total area is almost 100,000 hectares of mostly hilly and mountainous character at an altitude of 300 to 400 metres above sea level. The climate is characterized by particularly dry winters and ventilated summers, with high temperature variations due to air currents rising on the slopes. The soils of the foothills are made up of marine sedimentary rocks with an important clayey component. 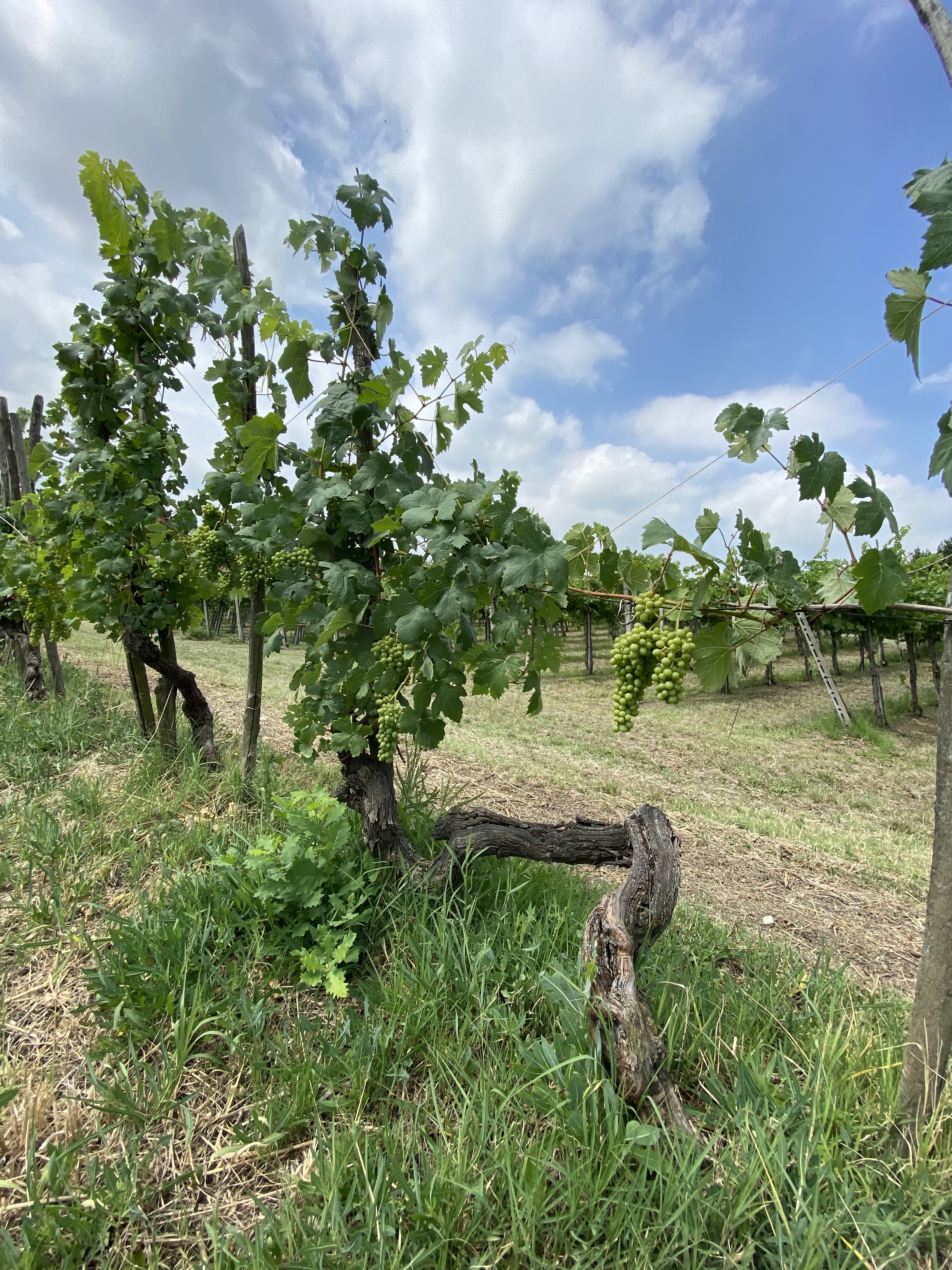 The great variety of vines present at that time had come to Oltrepò from France in the last millennium BC. , it had then spread with the Romans, while it had almost completely disappeared with the beginning of the “barbarian invasions”, during which the different varieties survived within the monasteries. Thanks to the church, viticulture spread again throughout the territory and the cultivated varieties were sometimes crossed with those of the Romans and of the barbarian peoples. Around 1900, the arrival of the phylloxera, a deadly insect for European vines, caused a drastic decrease in the biodiversity of the vines on site, a decrease perpetuated in the following century also by the various DOC regulations and by European funding.

Over the past forty years, thanks to state, regional and university research projects, part of those native vines have been recovered at the last minute and registered in the National Register of Vine Varieties. Among these are Ughetta di Canneto (Vespolina), Uva rara, Moradella, Mornasca, Croà and Verdea.

So, while the Croatina was already widely present in the 1800s in Oltrepò and still is today with about 4,000 hectares of vineyards, immediately followed by Pinot Noir, what happened to these other varieties that survived by a miracle? That’s what I tried to discover during my visit last July, even if I had the chance to see a fraction of what Oltrepò has to offer.

The wine area covers 16,000 hectares in 42 municipalities in the Apennine foothills. About 12,000 hectares are classified as DOC/DOCG area. However, about two-thirds of the production is not crafted as DOC/DOCG wine. Large quantities of grapes are delivered to the big spumante wineries such as Cinzano, Gancia and Martini & Rossi in Piedmont or as cask wine to Milan to produce mass wines. The Oltrepò is the largest producer of the Pinot Nero variety in Italy with around 3,000 hectares. There are many winegrowers’ cooperatives whose members cultivate small areas with an average of two hectares.

Although the sparkling is still the area’s flagship, many other types of wine are offered as well and they will be the focus of this article. Oltrepo’ is much more than spumante and fizzy red wines.

The offer is broad and diverse: Pinot nero-based reds, whites and rosé wines, the barbera reds, and riesling whites are all produced here, as well as some red sweet dessert wines, such as Sangue di Giuda (Judas’ blood) made of croatina, barbera, uva rara and vespolina.

Typical to the area is the slightly sparkling Bonarda red wine, frizzante, to be drunk young, with its fruity intense palate. This wine, made from the croatina grape, started as a farmers’ table wine but has gradually grown into a very enjoyable red wine. The Bonarda dell’Oltrepò Pavese actually received its DOC (denominazione di origine controllato, the second highest degree) status only in 2017.

Uva rara is another important native variety usually blended with croatina and barbera in Bonarda or Buttafuoco wines, it is mostly cultivated in Oltrepò and Northern Piedmont (Ghemme and Gattinara area, where it is blended with the local nebbiolo, Spanna). It’s uncommon to find a monovarietal wine of uva rara, but some producers are now focusing more on this soft, perfumed grape variety crafting medium body, lightweight, aromatic wines to be enjoyed young.

Riesling Italico thrives in Oltrepò pavese and it was widely cultivated before the phylloxera disaster. Riesling Italico is a white grape variety and it is also grown throughout Central Europe. It is not related with Rhine Riesling and in Germany it is called Welschriesling (trad.: Romanic Riesling).

This variety gives wines with good minerality and good level of acidity, their color tend to have green reflections. The mix of clay and calcareous soils of Oltrepò pavese are the perfect match with this variety.

Here a list of the wines I tasted and the wineries I visited that I feel like to recommend. I met some young, motivated producers who are trying to find a new identity for Oltrepò, starting from the native grapes and the traditional wines, distancing themselves from the commercial, massive production of international varieties’ cask wines or low quality sparklings.

The Pinot noir Metodo Classico (Oltrepò Pavese Docg) remains the flagship denomination of the area, but I appreciate the efforts of the new generation of winemakers to find another way with the still reds and whites to give a recognisable new image and identity to the wine region.

There is still a lot to work on, first of all the confusion of denominations,  associations and wine names (sometimes the same wine has different names just five kilometres apart) that does not help the attempt to find a new way to market internationally. But as a wiseman one day told me: the blooming season is short, but, for best results, the ripening season must be long.

Five generations of winemakers and more than a century of history is the huge legacy of Vitea winery. Fathers and sons shared in the centuries the same passion for wine. Vitea  longed to produce D.O.C. quality wines in the Seventies, after many years as vine growers. They practice an environmentally friendly agriculture and are engaged in an importa project for the preservation of the local biodiversity. Today the winery has been modernised under the lead of Gaia and Stefano Faravelli: young, passionate and talented new generation… Read more about Vitea here. 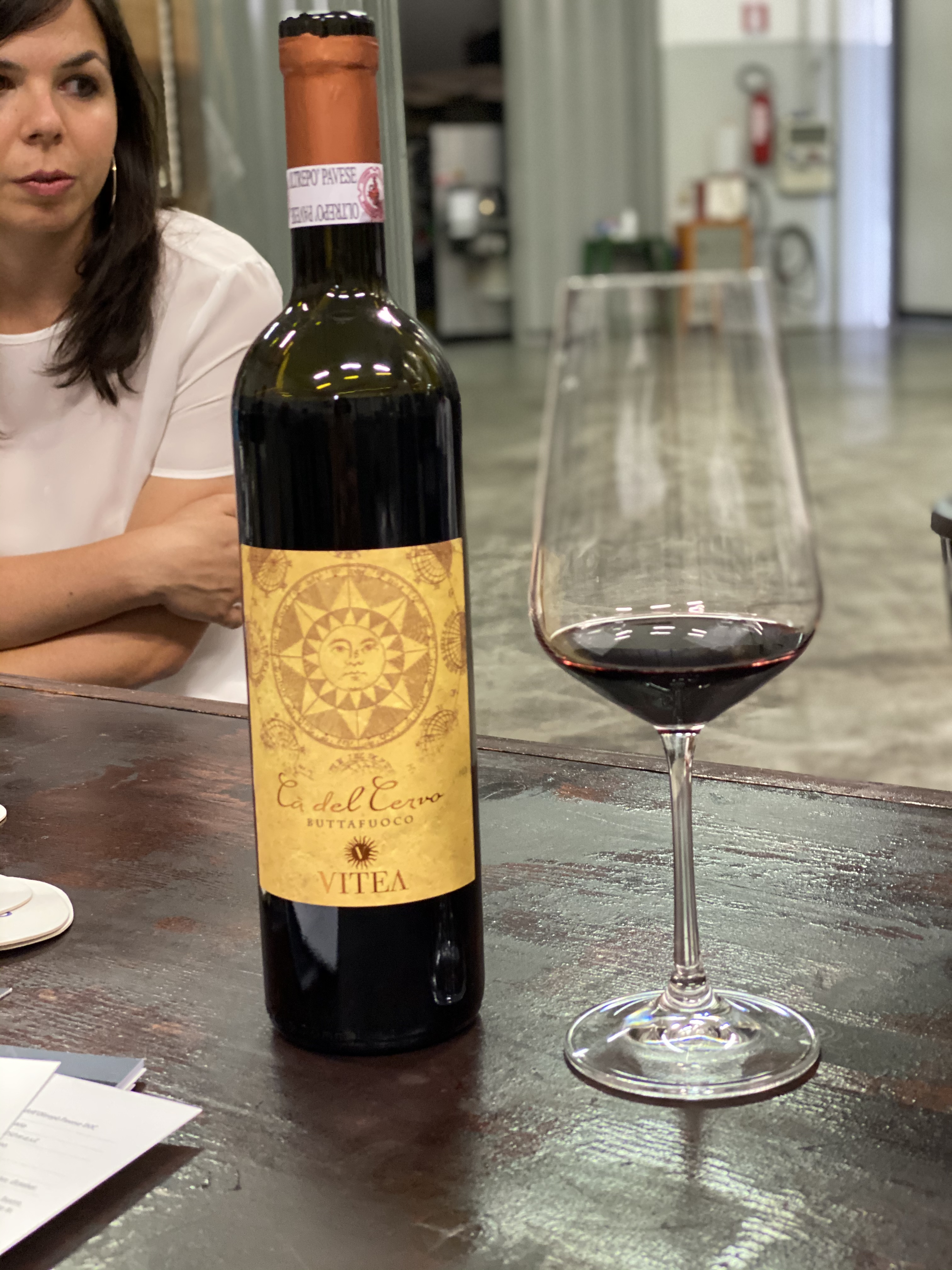 “Respect for the land, the vine and the grapes are the foundations of my work philosophy. I produce my wines with agronomic and enological techniques that do not mortify the imprint of the vine and the territory. The grassing of the land, the fertilizations with organic substance, the use of copper and sulfur for anticryptogamic treatments, the limited use of selected yeasts and sulphites in the cellar are just some of the attention I put into the production of my wines.

Those who produce naturally run more risks, but rejecting standardization and accepting the challenges of nature produce products of great personality that give immense satisfaction” 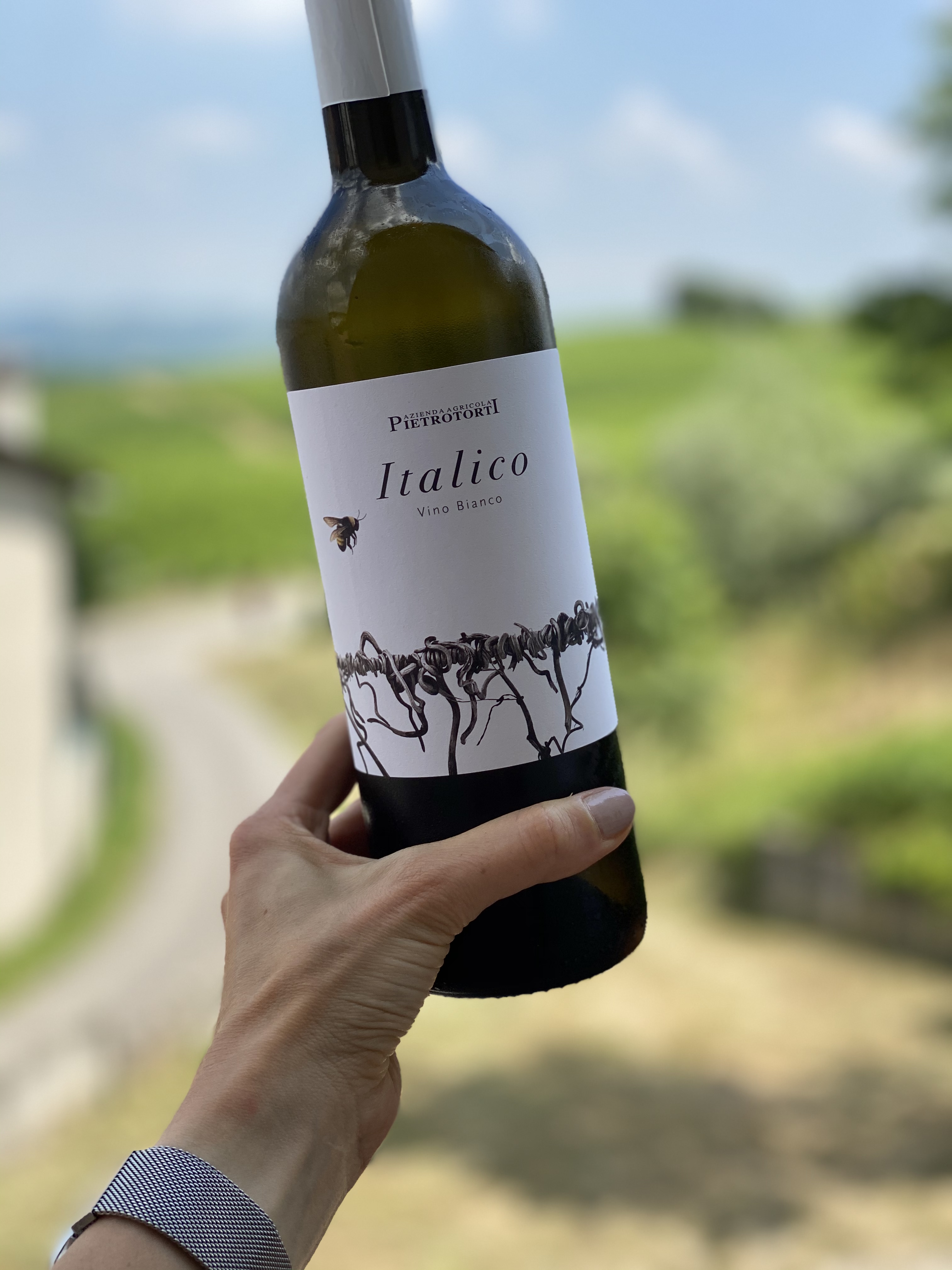 Already in the early years of the last century, Paravella family cultivated their own vineyards on the hills of Stradella (Pv), in the hamlet of Cassinello, one of the most suitable areas of Oltrepò and Lombardy for the production of grapes that give full-bodied and elegance.

Thanks to the work of Peppino Paravella and later of his son Clementino, the company has expanded to reach 18 hectares of vineyards.Today Clementino is supported by his sons Matteo and Nicolò to pursue the goal of producing quality wine in a sustainable way. 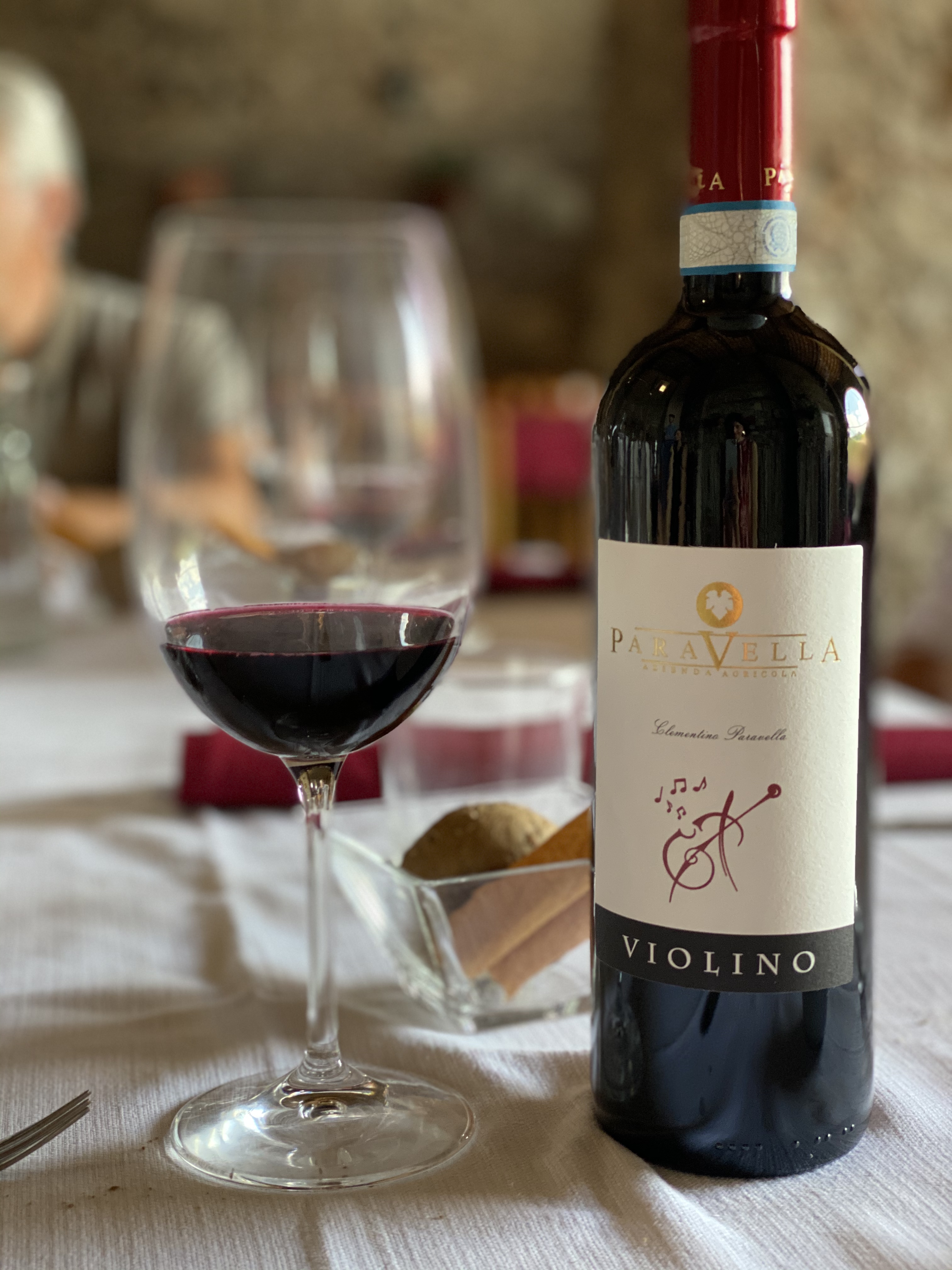 Davide just took over his dad’s vineyard and winery, still in the process of a restyle, but focusing on the traditional wines and varieties. Only 4 hectare in the hills between Casteggio and Corvino, the winery’s production is very limited, no more than 10.000 bottles per year. The vines are 50-60 years old, mainly barbera, croatina and uva rara.

I recommend their monovarietal Barbera (red and rose’) and their Casteggio DOC, a hand selection of their best old vines barbera, aged in oak for 12-18 months. The Casteggio Doc appellation is one of the tiniest of the area, only three producers craft wines with this denomination on the label.

Watch my Oltrepò visit in this VIDEO and SUBSCRIBE to my Youtube channel so you won’t miss future wine travels.