Cos D’Estournel: the thousand nuances of Saint-Estèphe’s terroir in a glass

Living a fairytale made of Châteaux, excellent wines, foie gras, oysters, art and the talented and experienced wine producers and wine makers of one of the most iconic wine regions in the world. This is what has been for me En Primeuer week in Bordeaux last April: one of a kind experience, educational, emotional, memorable. My dreaming wine trip has been provided  by Millesima as part of my Millesima Blog Award which I am so proud to have achieved and so grateful for to all my readers and followers.

En Primeur week, for those of you who never heard about it,  is a preview of the last vintage (in this case 2018) from the Union des Grands Crus members in all Bordeaux appellations. This event incorporates different appellation tastings (Pomerol, Pauilliac, St. Emilion etc…)  and lunches in each château, it is restricted to the wine trade and press members on invitation only. Throughout this event, winemakers share more intimately the details of their 2018 vintage before it will be released on the market and enjoyed by the public. It is also the occasion for the international press to score the wines and write reviews before the bottles are released.

Millesima , who invited me to En Primeur, is the leader of French fine wine merchants since 1983. They have more than 2,500,000 bottles in their stock from the very best vintages produced in Bordeaux, Burgundy, the Rhone Valley, Alsace, Champagne and other regions. If you would like to find out more about it and the international Blogger contest they sponsor every year, I list all the links below.

Since images speak often more than words, I link below also part 1 of my travel video with Cos d’Estournel magnificent visit, dinner and tasting.

Located in the Saint-Estèphe sub-region of the Mèdoc wine region of France, Cos d’Estournel winery is distinguished as a Bordeaux wine property founded in 1811 by Louis Gaspard d’Estournel. The name “Cos” is derived from the old Gascon dialect word for “hill of pebbles,” and it demonstrates the rolling hills located here. At its core, the winery consists of a plateau composed by deep gravel and clay soils, and it is further divided into two slopes that enjoy contrasting climatic and geologic influences.

The entirety of the Cos d’Estournel soil composition is an amalgamation of layers of soil types—thus, contributing further to the distinctive flavor profiles of the wines produced here. That being said, the grapes are grown specifically in the area of the plateau where the soil content and sun exposure allow for most successful cultivation of the grapes. Merlot vineyards are located on the East slope with the limestone and clay soils, whereas Cabernet Sauvignon is grown at a higher elevation with an ideal drainage.

Story of the winery

The wines produced at Cos d’Estournel have come to be world-renowned because of their unprecedented terroir, historical significance, and subtleties in flavor. Today, the winery is home to 100 hectares, two-thirds of this space belonging to Cabernet Sauvignon vines, with an additional space designated for Merlot, Cabernet Franc, and Petit Verdot vines.

Cos d’Estournel is deeply-rooted in historical tradition, and this is clearly seen in some of its oldest vines dating back to the early 20th century. The vines are 45 years old on average, with an average age of 55 years old for the vines whose grapes are used in their first wine. Each of these vines have taken root in the very deepest layers of the soil, and they continue to prosper to this day—a true testament to the intricate nature of the estate’s terroir. These vines, despite their low yield and the careful attention they need, produce grapes that illustrate the very identity and heart of the château.

Since 2000, when current owner Michel Reybier first acquired Cos d’Estournel, the estate has continued to focus on restoring the historical significance of the winery. Reybier even says himself, “At first glance, I was attracted by the history of the place. And then when I visited the estate, I felt instantly how unique, how exceptional it is.” His commitment to maintaining the standards set by Louis Gaspard d’Estournel paired with Reybier’s own penchant for innovation has proven to bring the traditions of the winery into the 21st century.

The legacy and intricacies of winemaking at Cos d’Estournel

At Cos d’Estournel, they have overhauled their way of winemaking to preserve the true flavors and maintain the integrity and the purity of the grapes. In doing so, they have created a cellar that functions completely by gravity—no pumps are used at all.

First, the grapes are moved up using a conveyor system that brings them into the vats for the fermentation process. They pass through the sorting table with a destemmer, and then a lift moves them into a small mobile vat, which treats the fragile grapes with extra caution to avoid unnecessary stress and minimise oxygen contact.

At the beginning of fermentation, an aerated cap forms and allows a little oxygen contact for the grapes at the top of the vat, while still controlling the extraction of the best parts of the grapes for the wine to be produced later on. Because part of the fermentation happens by spontaneous break of the berries, the process incorporates native yeast, which further adds to the multi-dimensionality of the wine. 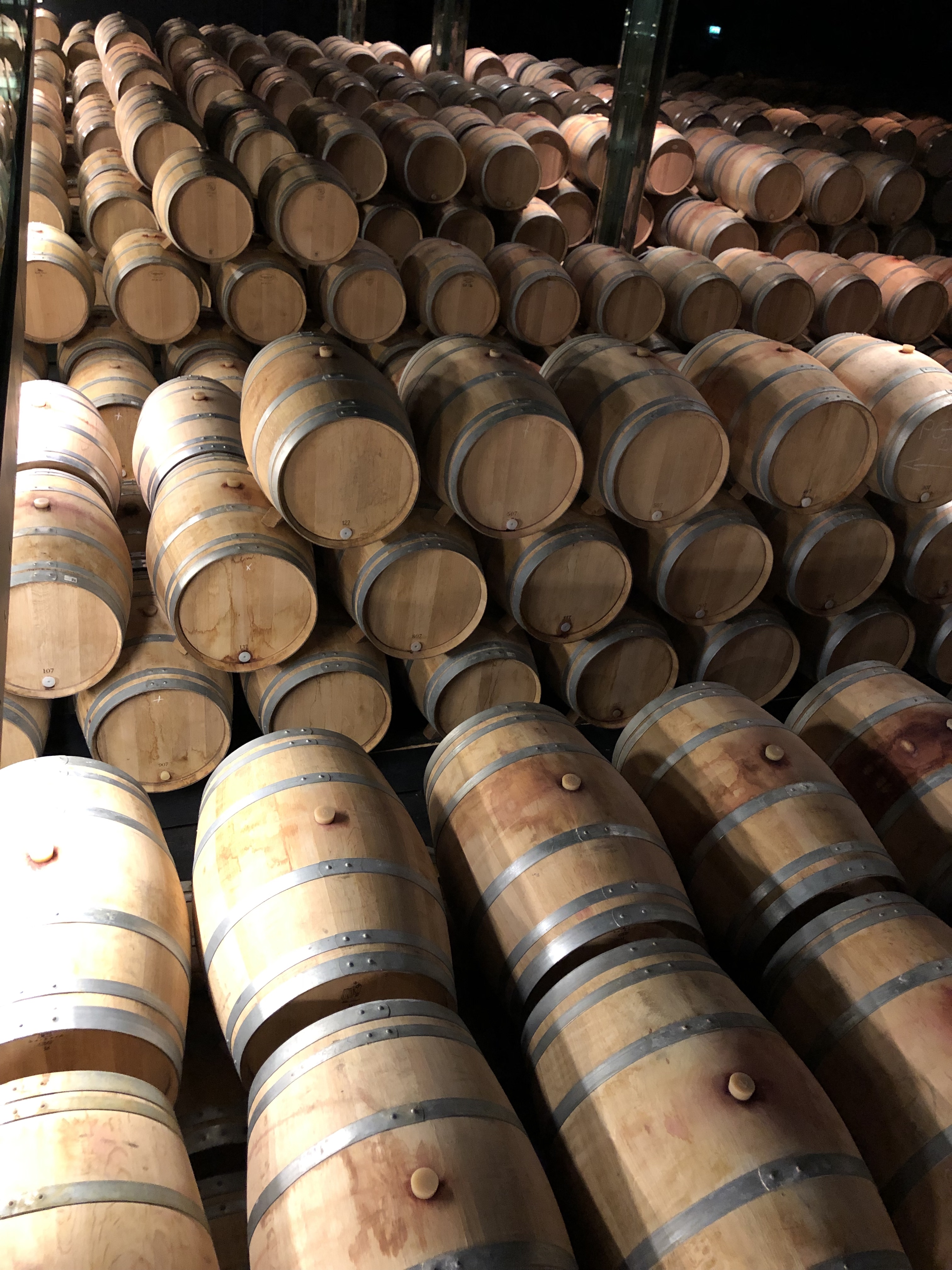 Throughout fermentation, the winemakers are able to manipulate the wine for about 4 to 6 days; this is the only part of the winemaking process in which they can do this. In this manipulation, they empty the juice from the vat and return it to the vat from above, and this both horizontal and vertical movement yields more nuances in flavor. The pump up and punch down technique for extraction.

From here, the free-run wine produced flows by gravity into other vats and is taken to be pressed in their vertical presses; while pressing the wine, it is also naturally filtered. After blending the wine, the Cos d’Estournel appellation is aged for about 18 months in barrels and the Pagodes de Cos is aged for 12 months. Gravity proves to be of utmost importance in this winemaking process, as it allows the wine to personify the diversity of the terroir without detracting from its grandeur.

“A precious mosaic” of terroir

Cos d’Estournel winery has the distinctive location between the ocean and the Gironde estuary, which brings a diversity that is reflected greatly in its terroir. As it is situated between these two bodies of water, Cos d’Estournel has the advantage of more moderate temperatures with great exposure to the sunlight, as well as the cooling impact of the winds. The varied levels of soils both on the east and the south slope add the benefit of a more efficient drainage.

Both the east slope and south slope provide also for contrasting climatic effects: the east slope is close to Gironde estuary and is influenced by cooler breezes in the summer, and the south slope has the advantage of higher sun exposure. The east slope, however, is more favorable to growing Merlot grapes because of the way they arre progressively exposed to sunlight throughout the day, ranging from mild temperatures in the morning to more intense as the day continues. 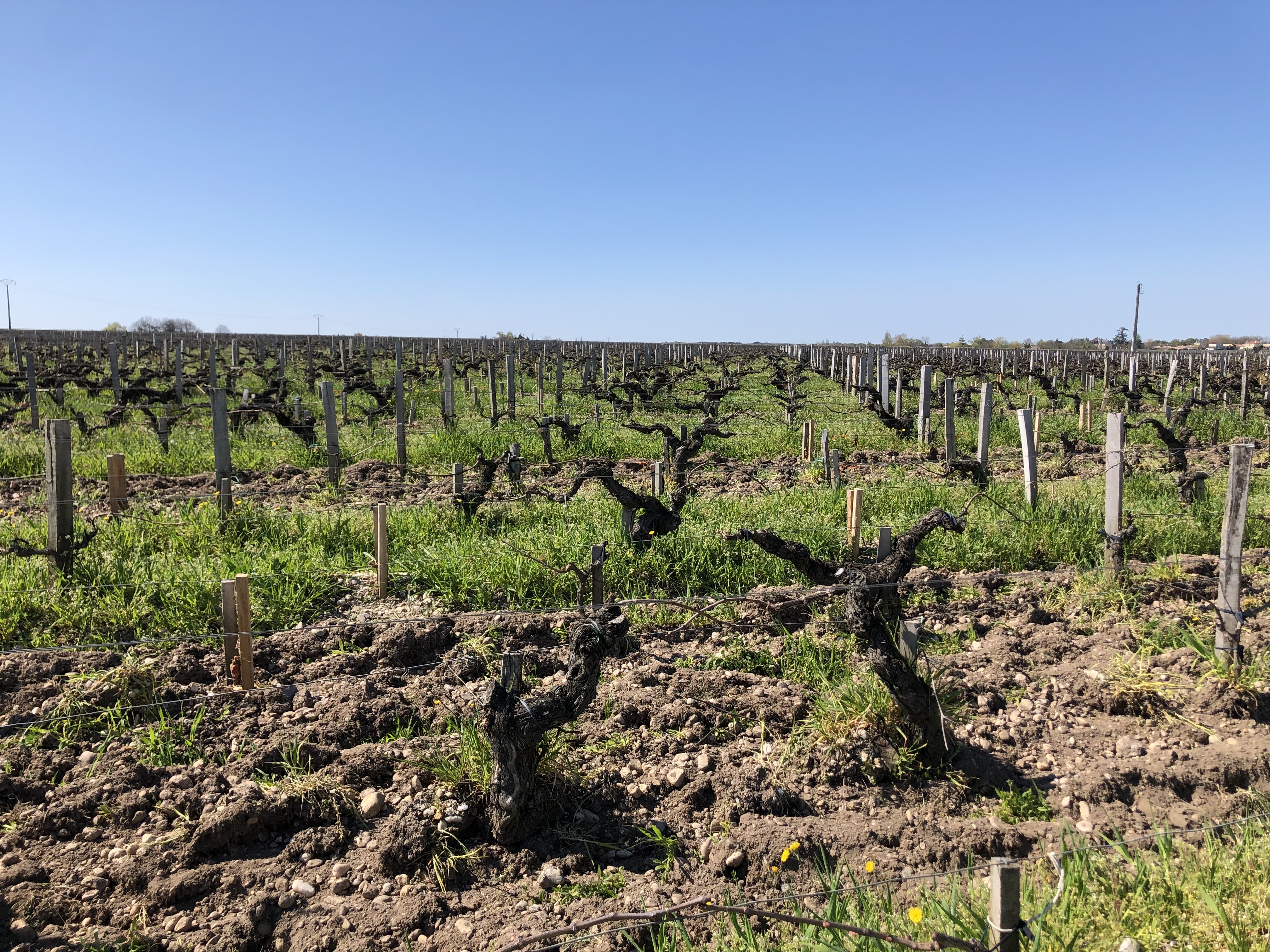 Beyond solely its location, Cos d’Estournel winery can count on a complex soil composition that is also responsible for its dynamic and multilayered wines. This plateau comprised of layers of gravel mixed with clay, which rest upon pure clay soils on a final layer of marl and limestone. With this diversity, the vines can occasionally be positioned upon areas that are affected by two or more of these soils at a time. Because of the precision required for ensuring the grapes are grown in the most ideal of soils, it is imperative for the winery to be able to identify what soils are located at each part of the vineyards.

The winery technical team has undertaken soil analysis in recent years. In 2000, one hundred pits were excavated around the vineyard to examine soils types. Four years later, advances in technology allowed them to conduct a resistivity analysis to paint a more accurate picture. They discovered 19 different soil-types that form the template to treat the vineyard as individual blocks, each vinified in their own dedicated vat. 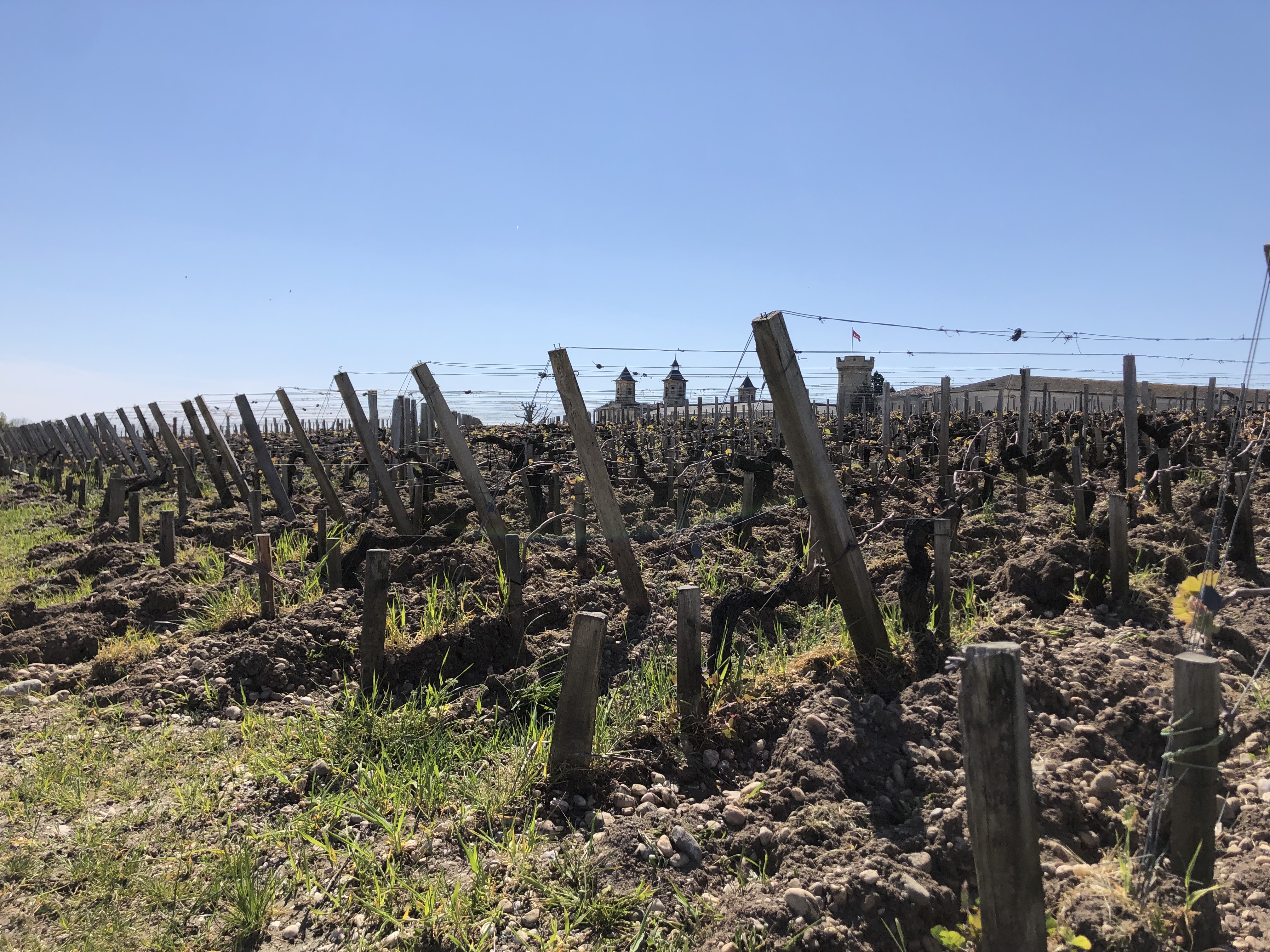 Furthermore, because Cos d’Estournel vineyards are more than 55 years old, their vines have deeper roots and can more easily read the multi layered soil; this adds to the significance of their ancestral roots. Each of the wines produced from the grapes of the Cos d’Estournel vineyards have such variety that contributes even more to the distinctive nature of these complex wines.

The Cos d’Estournel appellation wine of Saint-Estèphe Bordeaux 2017 is produced with 66% Cabernet Sauvignon grapes, 32% Merlot grapes, and 1% each of Cabernet Franc and Petit Verdot grapes (the blend percentages  change depending on the vintage, of course). This balanced and perfumed wine has a high potential for aging, and it is known for its well-rounded, elegant flavor profile. Additionally, Cos d’Estournel is a structured Bordeaux wine that benefits greatly from the diversity and complexities of the terroir. 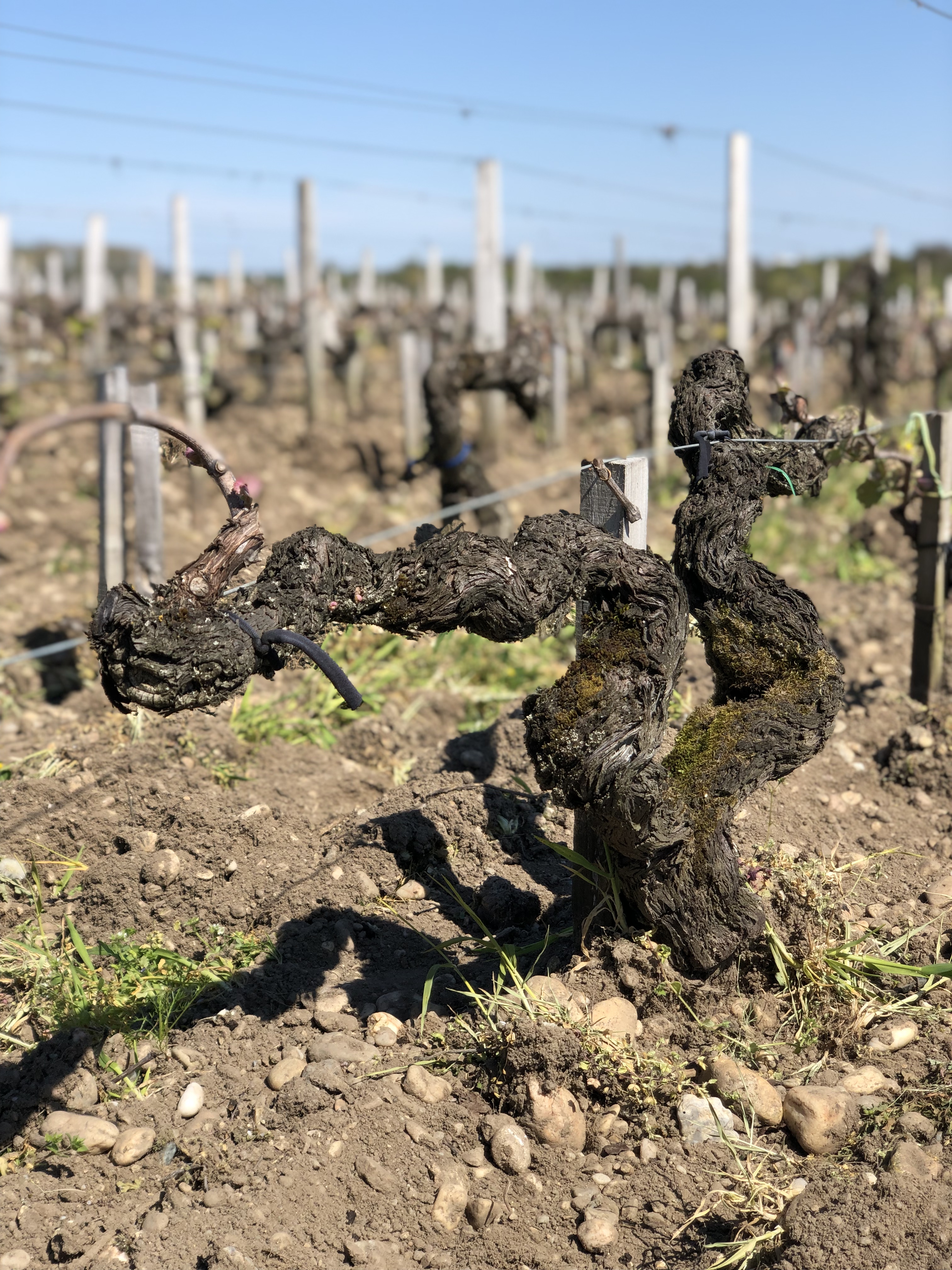 As is paralleled in the estate’s varied layers of thick clay, gravel, and limestone soils, the Cos d’Estournel Bordeaux is also layered with “a myriad of scents, nuances and tastes” that are distinctly identifiable to the senses. As the winery states of its appellation, “The Grand Vin of Cos d’Estournel is both demure and deliberately sensuous, a fascinating and elegant nectar.”

The superlatives that describe the 2018 vintage are in my opinion more than well deserved: “grandiose,” “immense,” and “exceptionally balanced.” This new vintage exemplifies the contrasting weather patterns experienced in the 2018 growing period, and it also highlights the intricacies and adaptability of the Cos d’Estournel terroir. This growing season, as the winery mentions, was characterized by “a cold, wet winter…followed by the warm, dry summer we had been hoping for.” 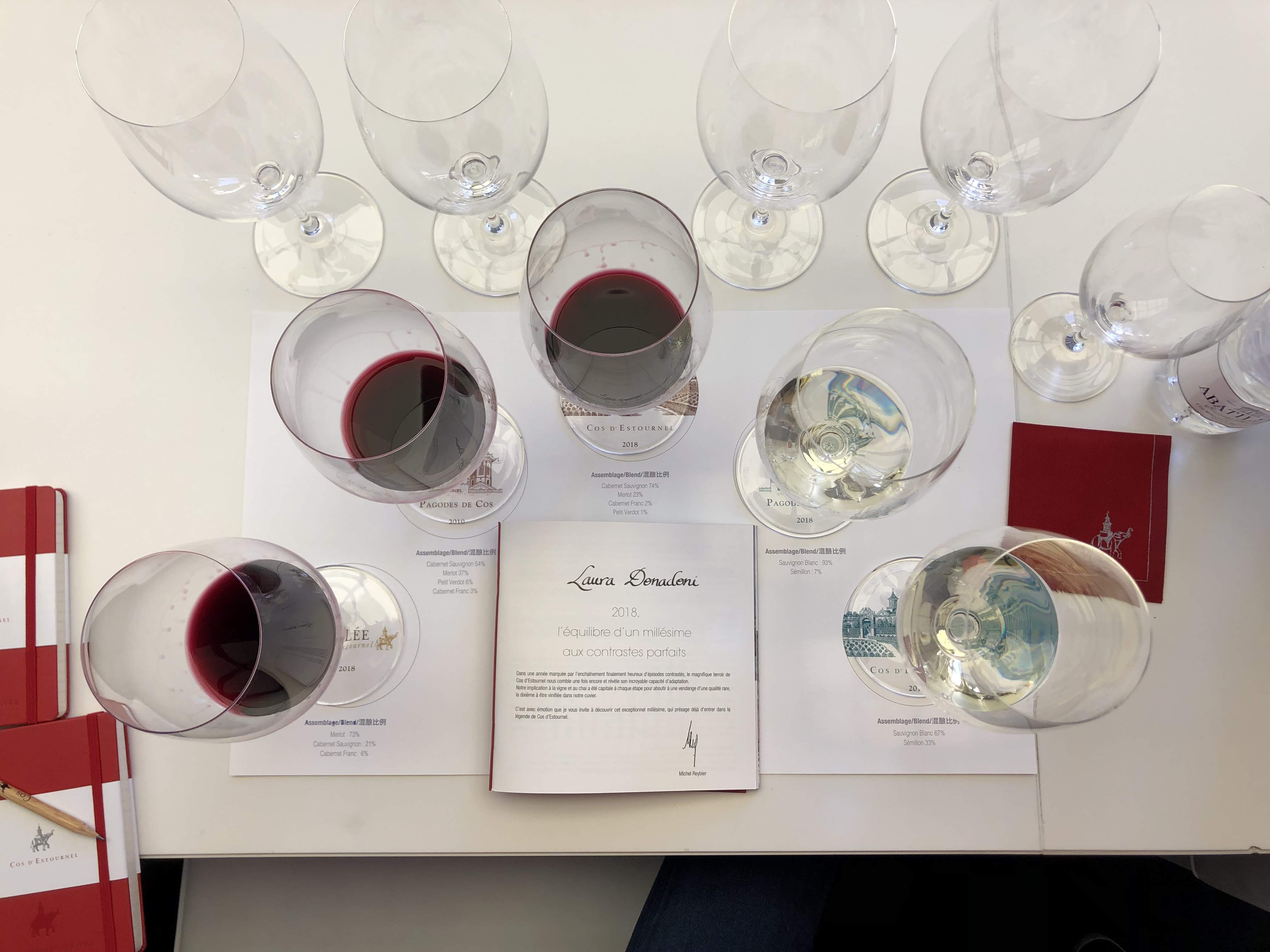 This “rare quality” vintage was crafted by the skilled wine making team of the winery, as their attention to detail was instrumental in producing a wine that encapsulates the complexities of the terroir and their unique, respectful of the grapes winemaking process. The 2018 vintage is the tenth of its kind to be produced in the winery’s gravitational cellars. 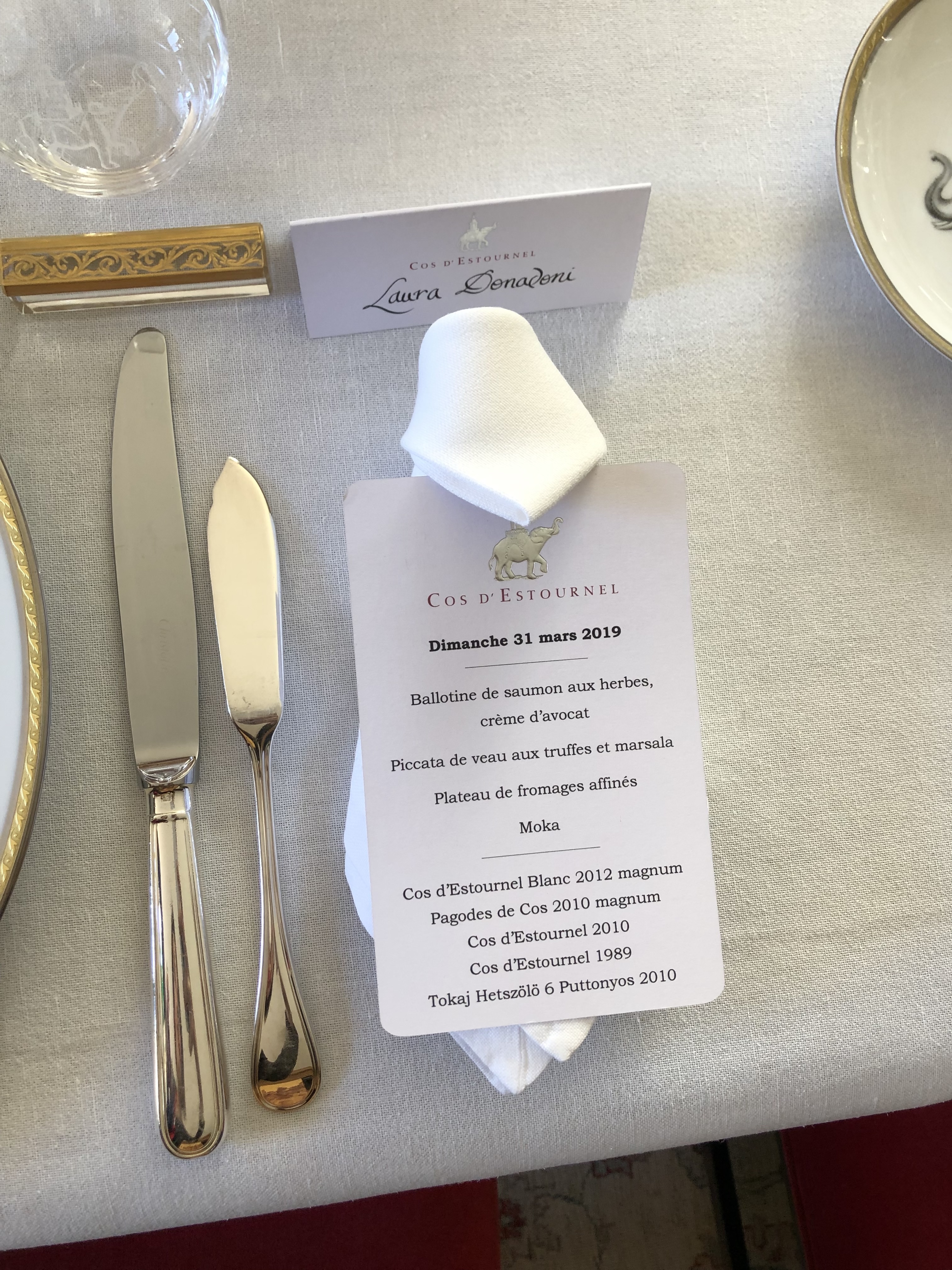 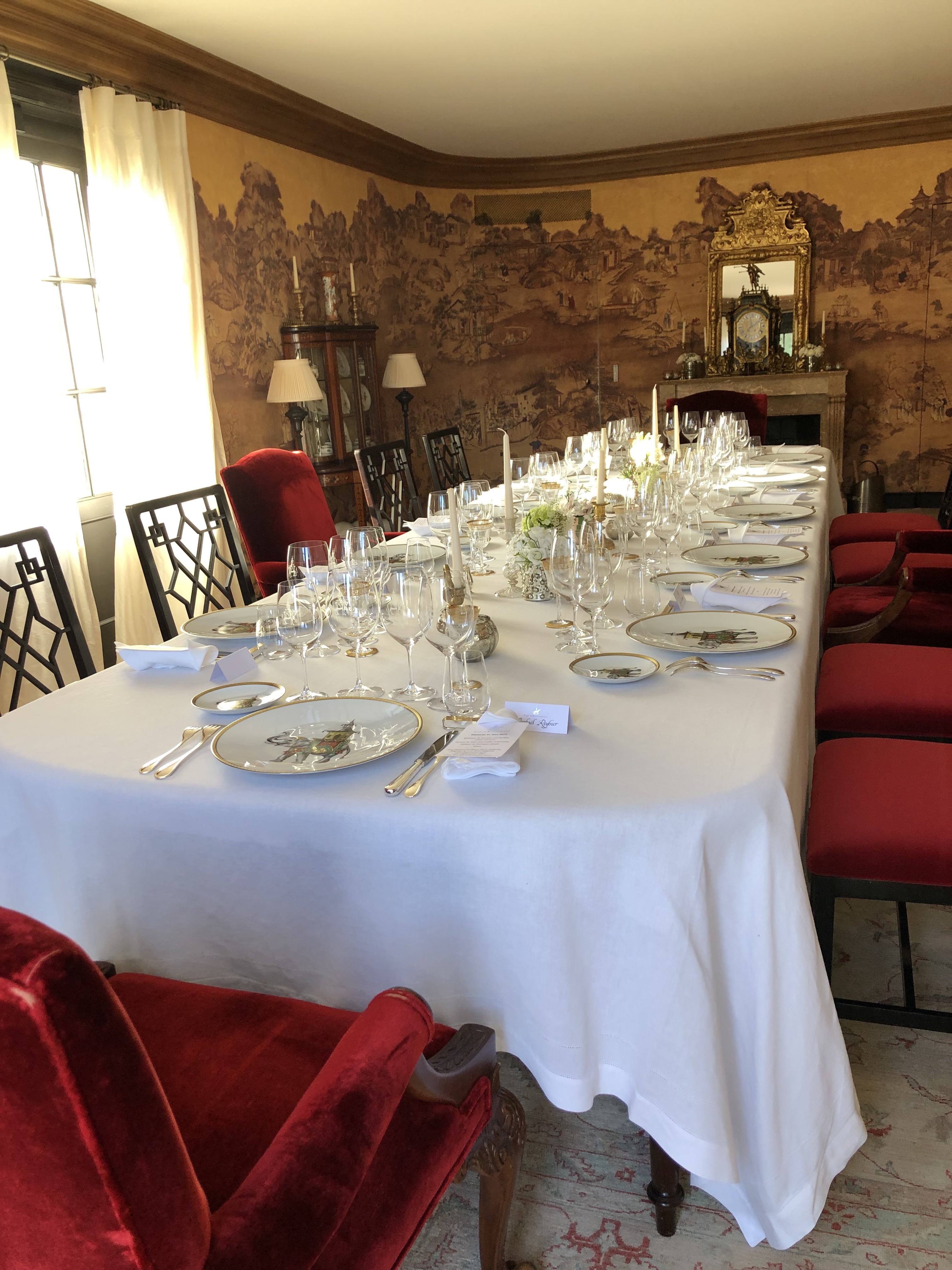 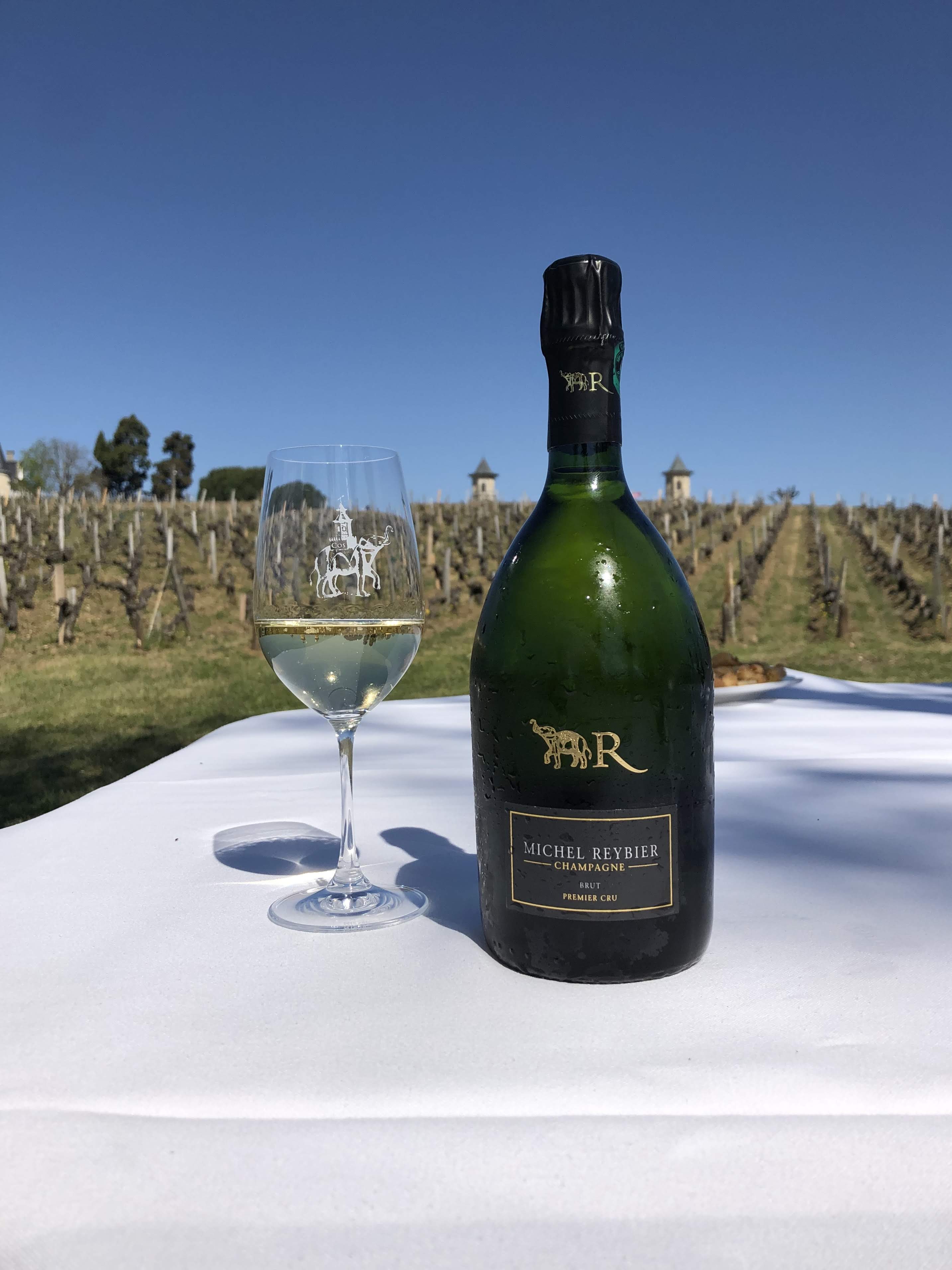 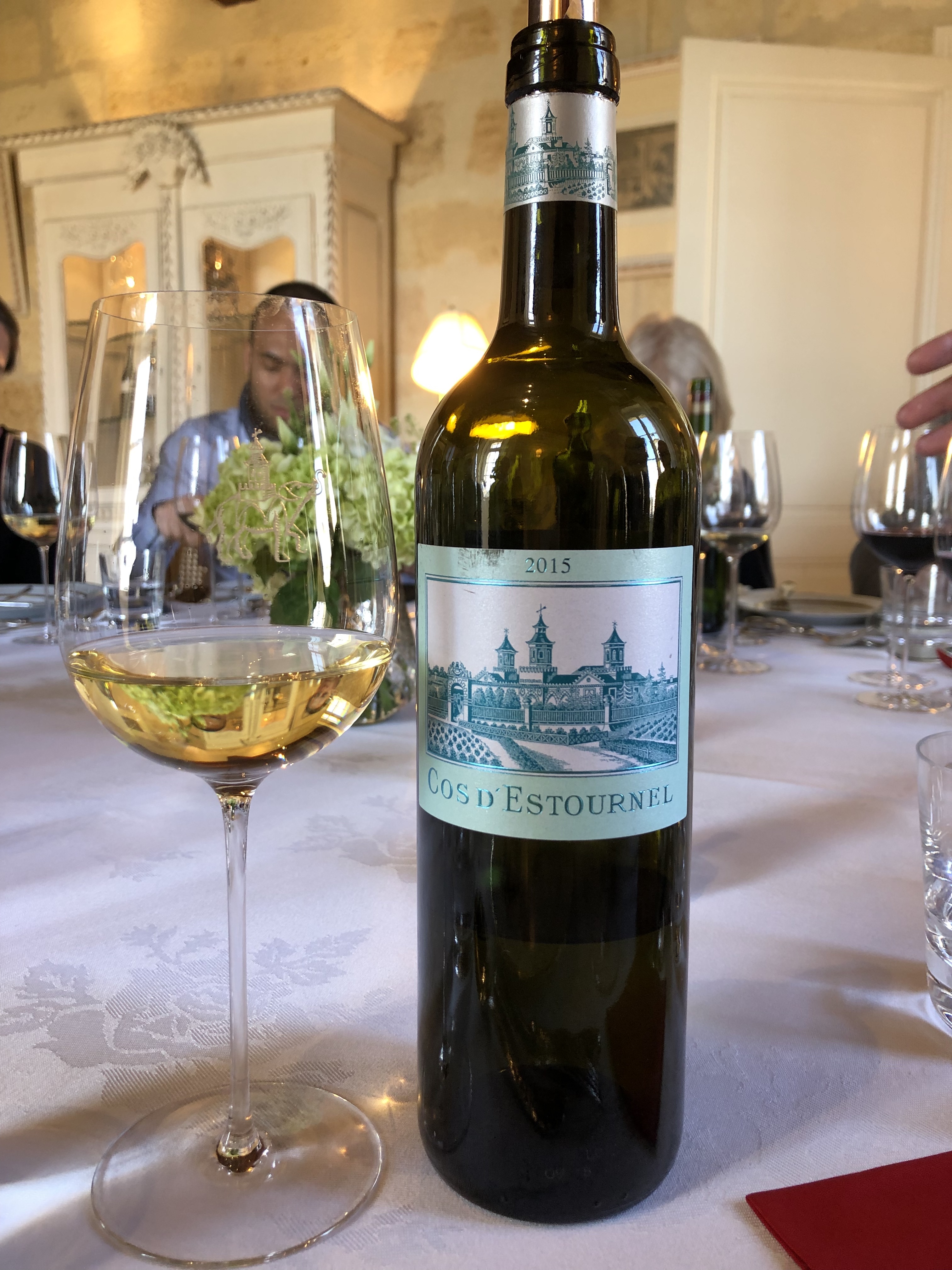 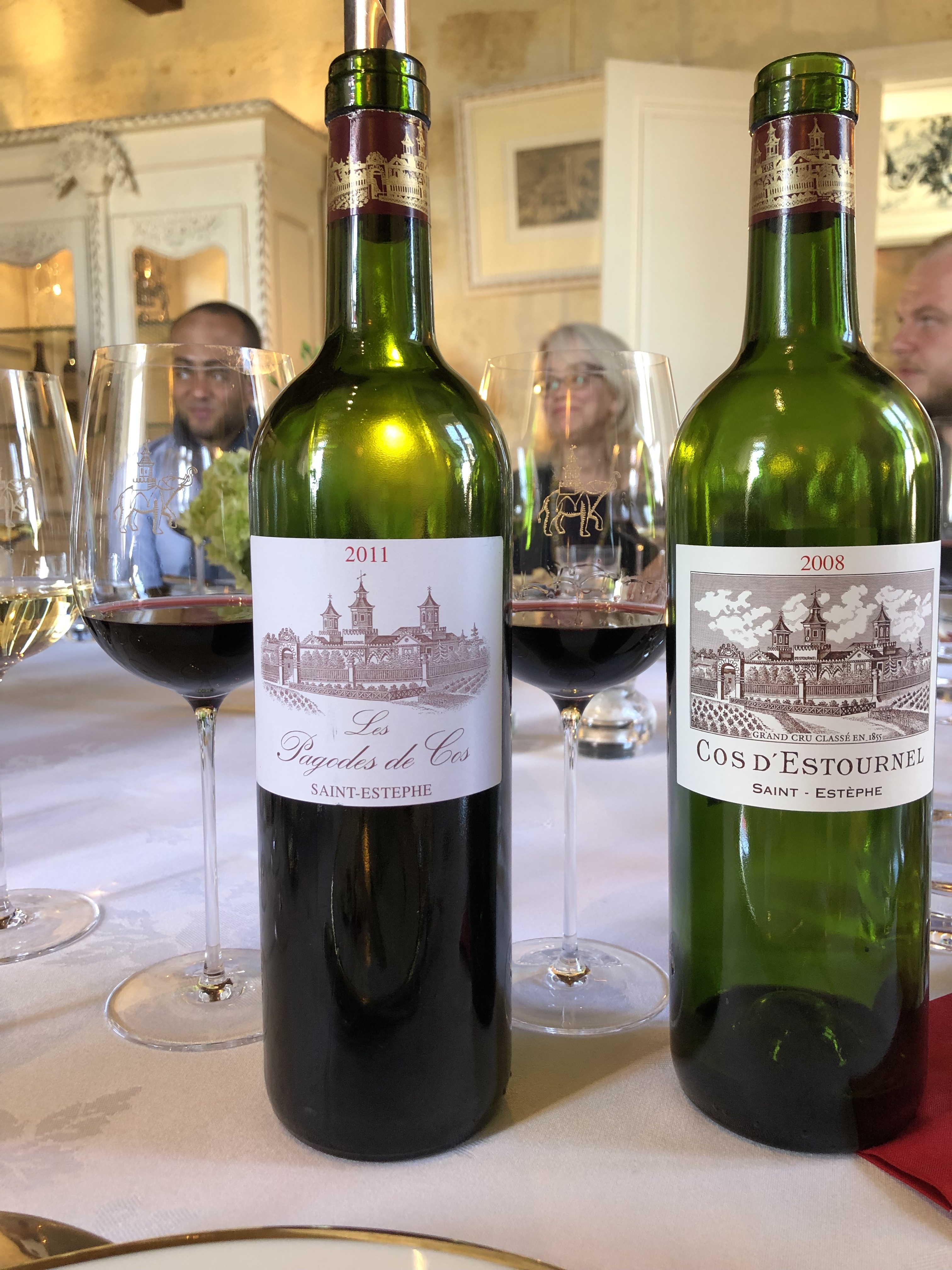 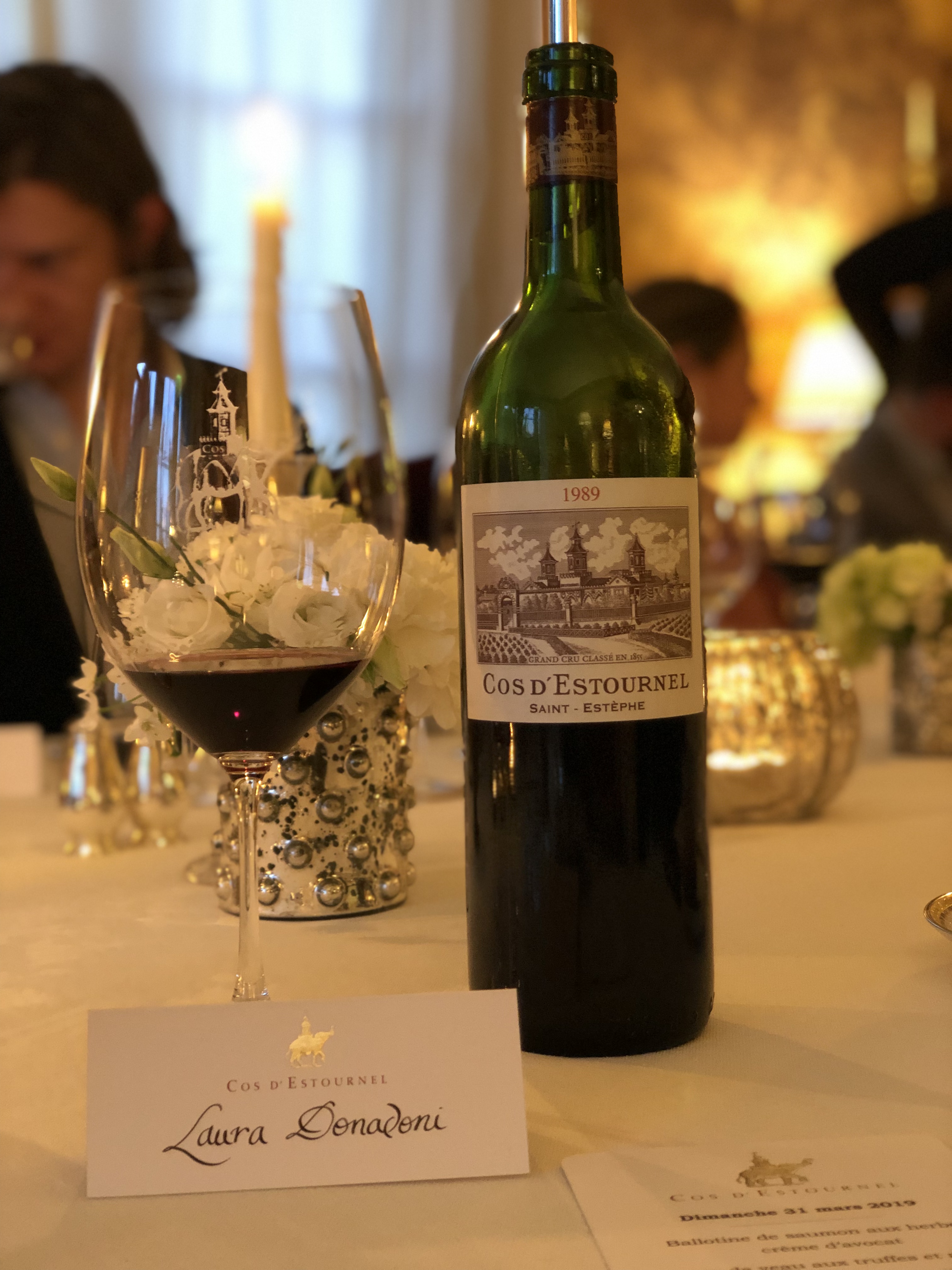 Video with live tastings and my impressions: