If there is any, surely my favorite silver lining of the global lock down is that Tour operators, cruises, and flights are sold for much less than the usual market rates (and offering free changes and cancelations to boot). What better way to get psyched about travel than by starting to plan a trip for when this is over? And what better than planning to visit the place of birth of unique wines? I got you covered. Starting this week I will publish a serie of blog post dedicate to your future dream wine trips  to Italy.

Here are two ideas for red wines lovers that you can combine in a single itinerary visiting the Northern part of Italy, especially Lombardy, where I come from. Think it as a well deserved trip at the end of this Corona-mess and a way to support Italy’s most afflicted areas. So, pack your suitcase and let’s go.

My hometown,  Bergamo, is has sadly become famous in the news for being the epicentre of the Coronavirus emergency in Italy. I won’t indulge further on the topic, since words, images and videos are all over the internet, I will just say that my fellow “bergamaschi”, including my family and friends have gone through the fire with their heads up, working hard, toughen it up, as they are used to do. Well, I think it’s time you pay a visit to Bergamo to witness yourself that it’s a wonderful medieval city, hidden in the hills, facing the Pianura Padana and surrounded by the Alps, called Prealpi orobiche. On those hills, one of the prettiest least-known countryside, a unique wine, Moscato di Scanzo Docg is being produced since centuries.

The name of the grape variety Moscato di Scanzo comes from the town of Scanzorosciate where they have been making wine since at least 1340 (the date of the oldest document attesting to the grape). During the Middle ages Moscato di Scanzo wines were renowned in Europe and Russia, among princes, and tzars, even Catherine the Great was a fan of Moscato di Scanzo. The grape is indigenous of the area and one of the few red aromatic varieties in the world. The vineyards are planted at 1.000 feet  (350 meter) altitude, the best sites present a marly-calcareous soil, locally called “sass de luna” (the stone of the moon), very friable and nutrient-poor. The method of production of  Moscato di Scanzo is also unique: once harvested the grapes are left on traditional racks to air-dry for a minimum of 21 days. The result is a sweet wine loaded with spicy  red berries and violets aromas and harmonious acidity.  It’s a very rare wine, hard to find outside of the country: Moscato di Scanzo Docg is the smallest appellation in Italy with only six hectares of vineyards and a production of roughly 65.000 bottles. 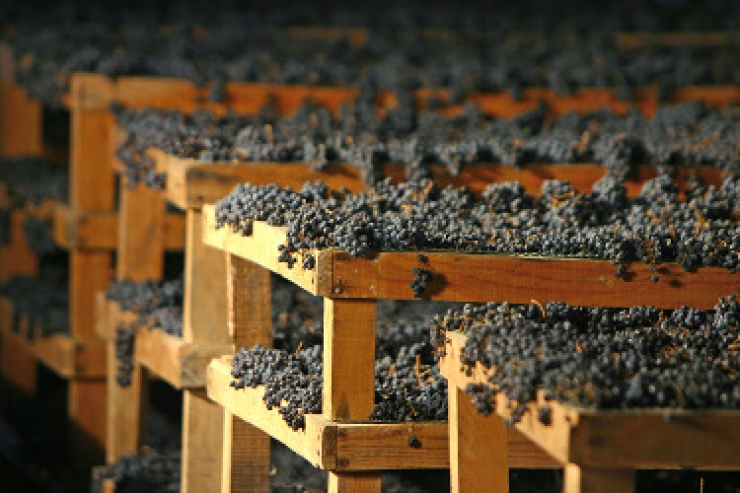 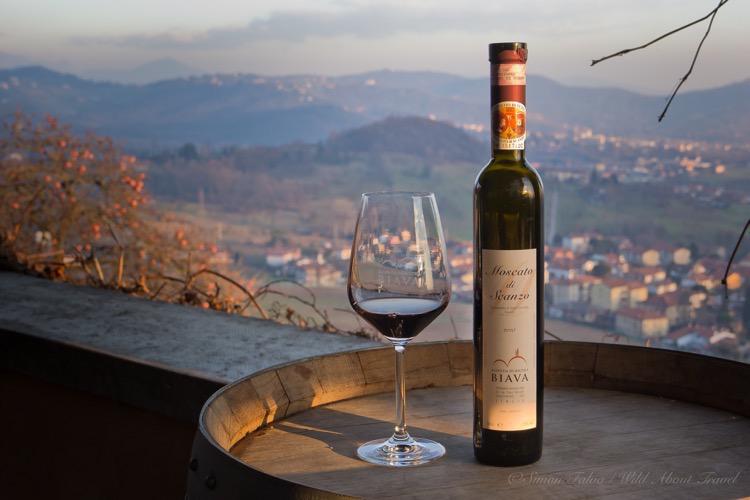 Bergamo the city is a masterpiece, an hidden gem, the ancient walls are  Unesco World heritage site, it is the hometown of the famous opera composer Gaetano Donizetti and much more… here

Iseo lake and Montisola (the biggest european island inside a lake)

In the valleys: salame bergamasco and typical cheeses (Branzi, Taleggio – yes it is from Bergamo, Formai de Mut, there are hundreds, 9 of the are certified PDO)

Bergamo is also hometown of many Michelin starred restaurant, you won’t be disappointed by the very high level of quality and creativity of the local renowned chefs. Some suggestions?

Another must see site in Lombardy for red wine lovers is Valtellina. 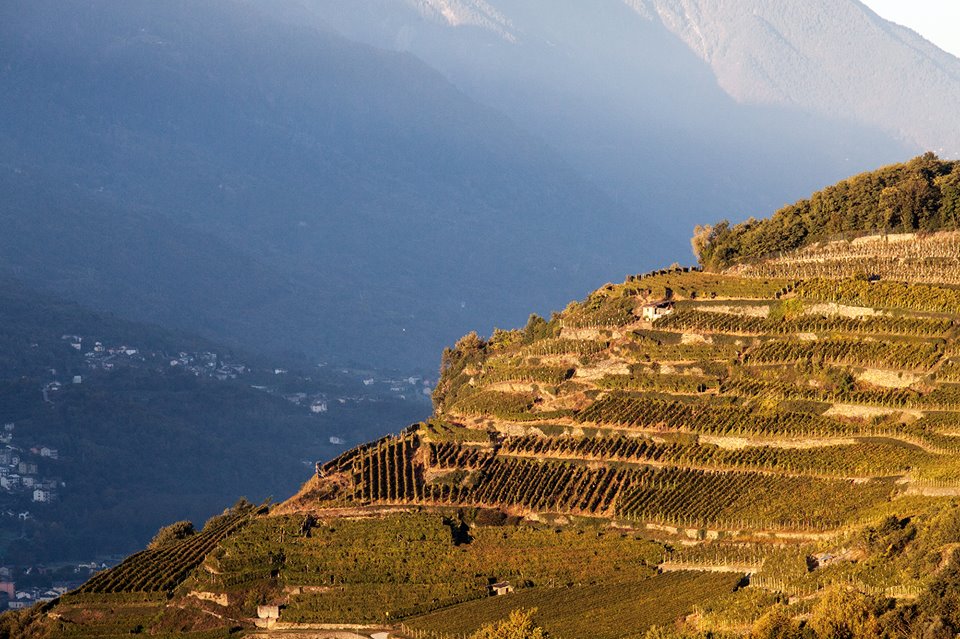 It is one of Italy’s smallest and least known wine producing regions. It stretches for 15 miles on either side of the town of Sondrio, with the Adda river  flowing in the middle. The valley was carved  from the hard granite of the local mountains by the glaciers that descended from the Alps during the last ice age.

Expect to see one of the most dramatic vineyard landscapes in the world. Perched on these impossibly steep slopes, tiny terraces, many less than 0.65 acres in size, cling to the south facing slopes of the mountainside at altitudes of 750 feet to 2,500 feet above sea level. The total area of cultivation is approximately 2,100 acres. The vineyards are so steep that a few producers hire helicopters’ companies for the harvest season, to carry the grapes to the winery. But most of the wineries still count on men power transporting grapes down the steep mountain trails or across never-ending staircases in small baskets called portini. 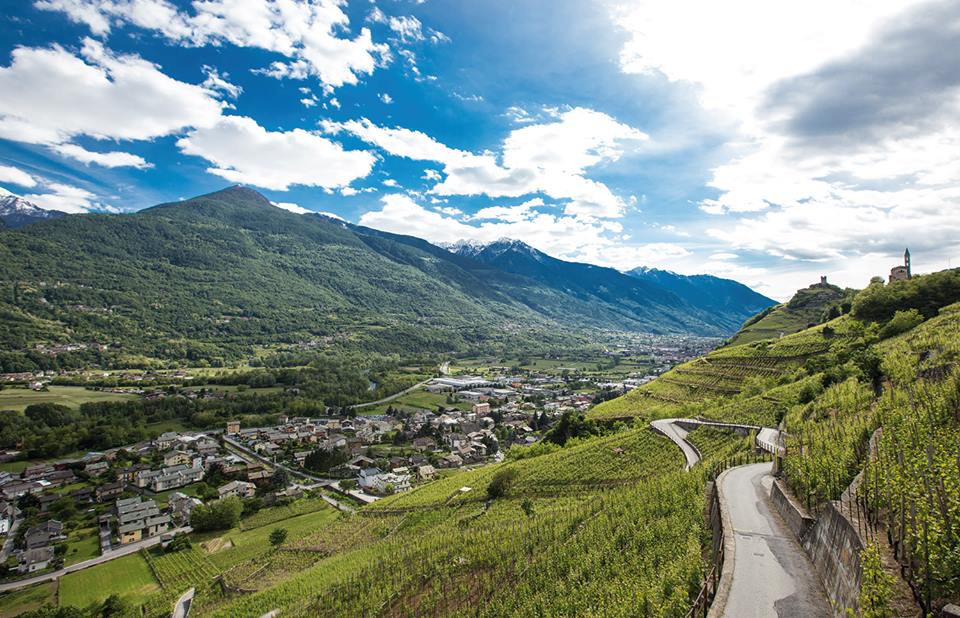 The terraces are held together by dry, stone retaining walls called muretti or little walls—some of which date back to the Middle Ages. Placed end-to-end, they would form a wall 1,500 miles long. This is the largest terraced wine region in Italy. It’s muretti are distinctive enough to have earned the region a nomination as a UNESCO World Heritage Site.

Wine production in the valley dates back more than 2 millennia, and predates Roman times. The region’s claim to fame is Chiavennasca, the local name for various ancient clones of Piedmont’s famed Nebbiolo grape. The valley grows several other indigenous grapes including Rossola, Pignola and Brugnola. All three varieties are genetically linked to Nebbiolo. 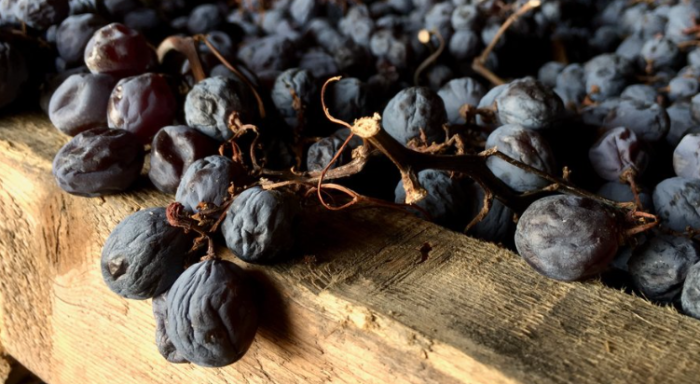 The drying, or raisinating of the grapes, concentrates the sugars and acids in the grape, producing more robust and concentrated wines. Historically, this technique was used to produce sweet wines, highly prized in antiquity because the elevated sweetness would help preserve them and give them a longer shelf life (see the history of Moscato di Scanzo above, which is a sweet passito wine). Over time, producers discovered indigenous yeast varieties, which had higher alcohol tolerances, and could ferment all the sugar in the grape must into alcohol. The result was robust, dry red wines.

The Sforzato di Valtellina is made from a selection of the finest Nebbiolo grapes. These are typically picked about a week or so earlier than the main crop. Immediately after harvesting they are placed on wooded lattices to dry in a room called a fruttaio. The room may have climate controls like a dehumidifier and heat or simply rely on the prevailing winds to dry the grapes.

The grapes are left to dry for a period that can range from 30 to 100 days, chiose of the producer. During this period, the grapes will lose between 20% and 40% of their volume, concentrating the juice and the acids and sugars they contain. The grapes cannot be pressed until at least the 10th of December.

After vinification, the wine is aged for 20 months, first in wood for a minimum of 12 months and then in bottle, before being released. Wood casks can vary from 5,000-liter botti to French barriques. The result is a strong red wine that is at least 90% Nebbiolo and with a minimum alcohol level of 14%. Most Sforzato wines are between 14% and 16% ABV. 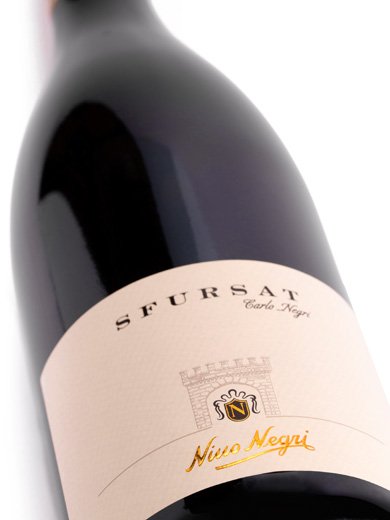 The combination of the Nebbiolo grape and the process of raisinating it for several months would suggest that the resulting wine would be a big, powerful, concentrated red wine, something of a cross between Piedmont’s Barolo’s and the Veneto’s Amarone. But it’s not the case. While Sforzato wines exhibit more concentration than their Valtellina brethren, they still show the crisp, bright acidity and elegance along with the pronounced, tart, black and red fruit flavors typical of a Valtellina mountain wine.

Winery to visit: There are approximately 40 wine producers in the Valtellina. You can visit the main ones (which have representation in the U.S. and export their wines): Ar.Pe.Pe, Nino Negri, Aldo Rainoldi, Sandro Fay, Mamete Prevostini and Triacca. Or you can scout for the many boutique wineries in the area with limited and only local production.

Sondrio and Bormio are really nice town to visit, but you can find tons of cultural and outdoor activities suggestions here 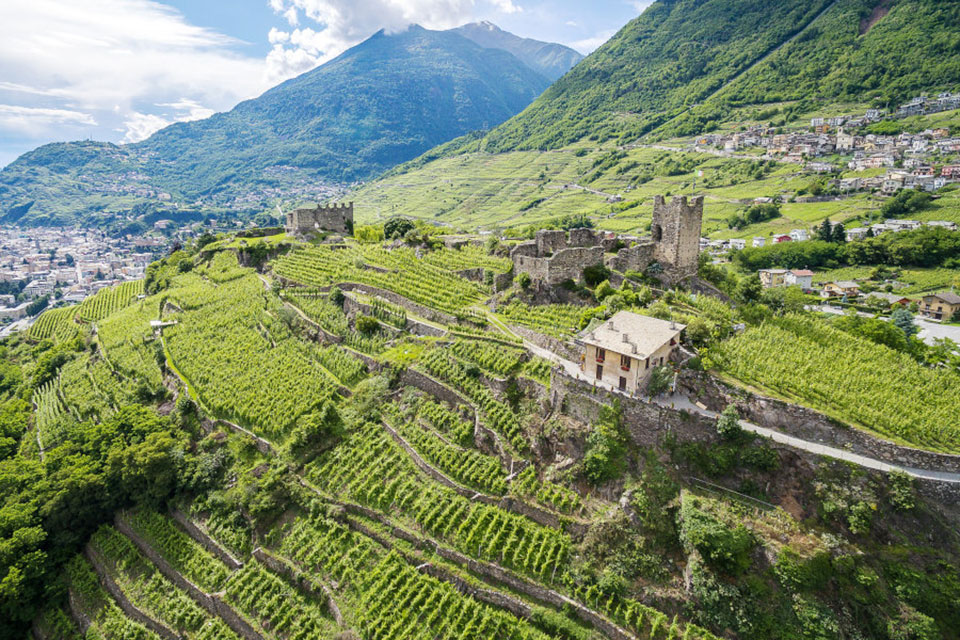 Bresaola: this cured beef is one of the products that symbolises Valtellina, it is protected by the PGI government seal of quality. Here all about bresaola. 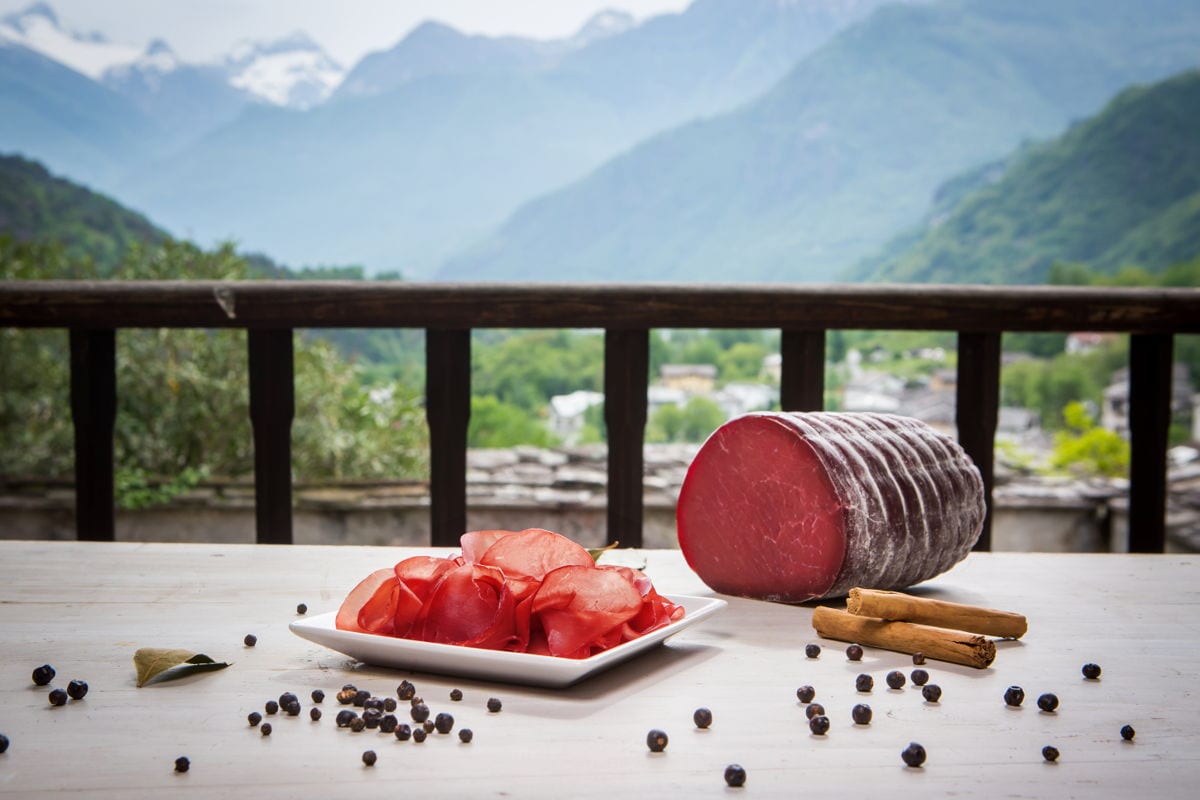 Pizzoccheri: The recipe for pizzoccheri is handed down from generation to generation. Taste it in Teglio, the ancient village where this pasta dish was created, or stop to eat in the restaurants, osterias and trattorias throughout Valtellina where it is still made by hand, as tradition dictates. The ingredients? Dark buckwheat flour and white flour. The pasta it makes is dark, cut into strips that are then cooked with savoy cabbage and potatoes and, to finish, generously flavoured with Alps butter and local cheese. 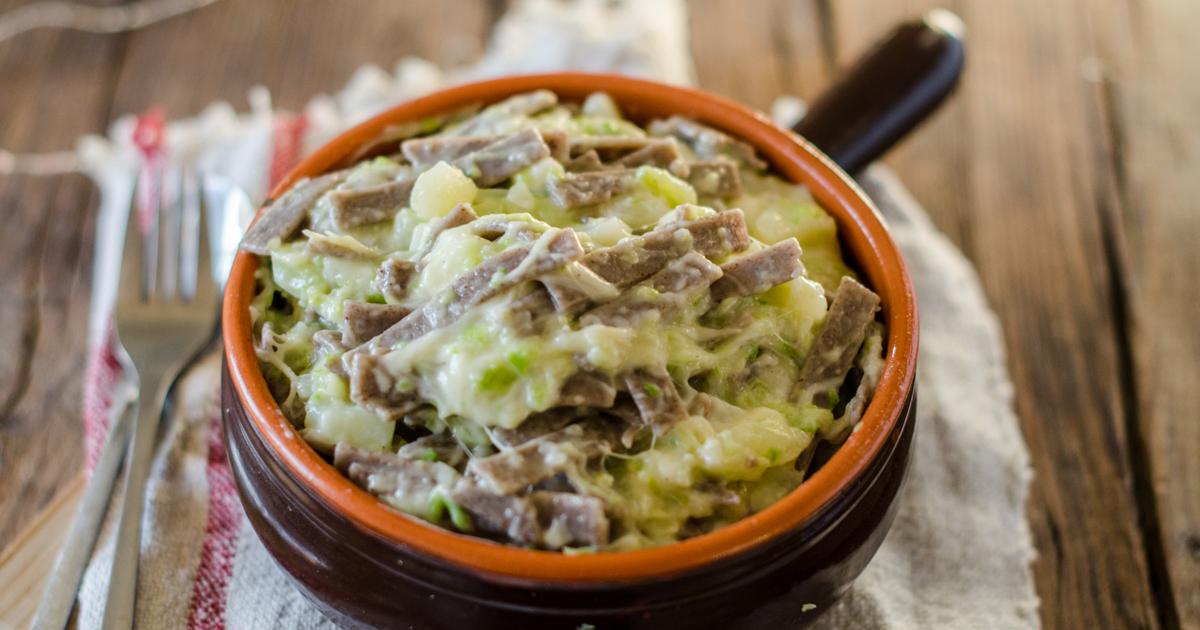