It’s sparkling. It’s from Veneto. But it’s not Prosecco. Ever heard about Durello?

For this week episode of the mini series “post-Covid wine travels” we fly to Veneto where I will introduce you to another undiscovered wine gem of Italy: mister Durello, the wine crafted from the Durella native grape. Follow me please, you don’t even need a carry-on.

I am sure you can agree that the Veneto’s wine wealth is well established: it is the first region in Italy for volume in wine production, thanks to a very articulated and broad range of options in the different provinces, showcasing excellent wines in every possible typology.

Apart from the undisputed primacy in the production of Prosecco and other wines crafted with the Charmat method (from Glera, Verdiso and Raboso native grapes), Veneto offers one of the best whites in Italy – the Soave, made of Garganega grapes.

Talking about reds, we are spoiled for choice, between the historic blazon of Valpolicella, the priceless lightness and flavor of Bardolino, the very high uniqueness of the “Bordeaux district” of the Euganean Hills (Colli Euganei), Montello and the area of Breganze, the great character of the lesser known Tai Rosso of the Berici Hills and the unmistakable austerity of Raboso del Piave.

To complete the qualitative and commercial overview of this incredible region, only a great Classic Method would be missing, which to tell the truth exists. And I am here to tell you about it.

Very few wine lovers outside from Veneto have knowledge or (the right) perception of this wine: we are talking about Lessini Durello, the DOC wine historically produced with the native Durella grapes. Lessini Durello is what I call an “underdog” wine, a nectar of great character, which reflects all the features of the territory where it was born, aka the area of ​​the Lessinia mountains, between the provinces of Verona and Vicenza: imagine 600 feet altitude rolling hills, uncontaminated and spectacular landscapes of volcanic origin, good ventilation and diurnal temperature shift. 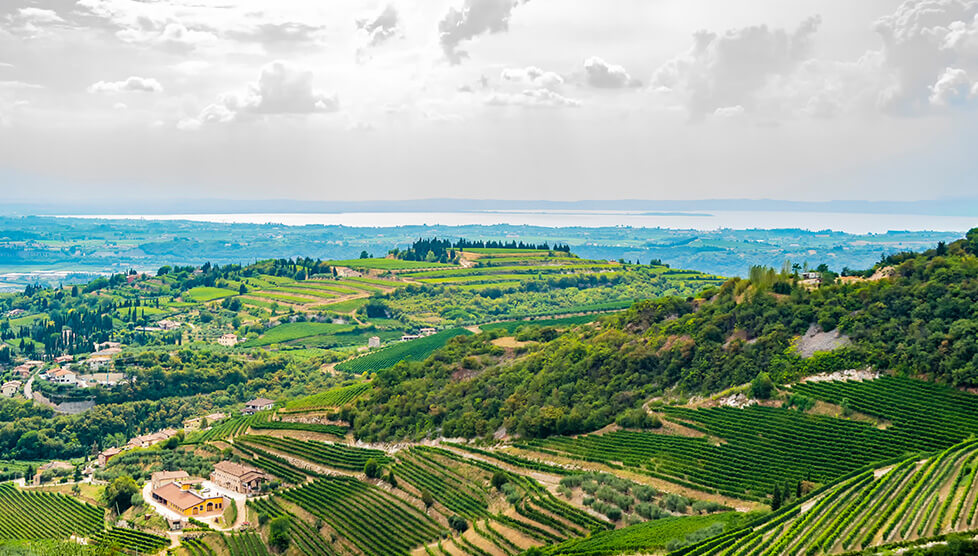 This is the territory of choice of the Durella grape, from which the wine takes its name: it is an autochthonous variety of ancient origins (reported since 1292 and widely studied by various ampelographers during the nineteenth century) , which first appeared in these areas in prehistoric times, as evidenced by the findings of some vine-fossils, ancestors of the current Vitis vinifera. The etymology of the name is almost certainly attributed to the thickness and leathery consistency of the skin, duro means hard in Italian which expresses in some way the same concept of hardness and toughness, supported by the extreme acidity characteristic of these grapes.

Durella grows perfectly on these soils characterized by an incredible fossil residue, testifying the presence in this area of ​​a prehistoric ocean, you can perceive the saltiness simply by drinking a glass of Durello with its unmistakable iodine and mineral characteristics, as well as a nervous and vibrant acidity that makes it ideal for sparkling wine.

However, the still versions are also appreciated: Durella shows all its austerity and originality; last but not least the rare sweet versions are excellent: the sustained sweetness is well balanced and softened by the remarkable and decisive acid vein. 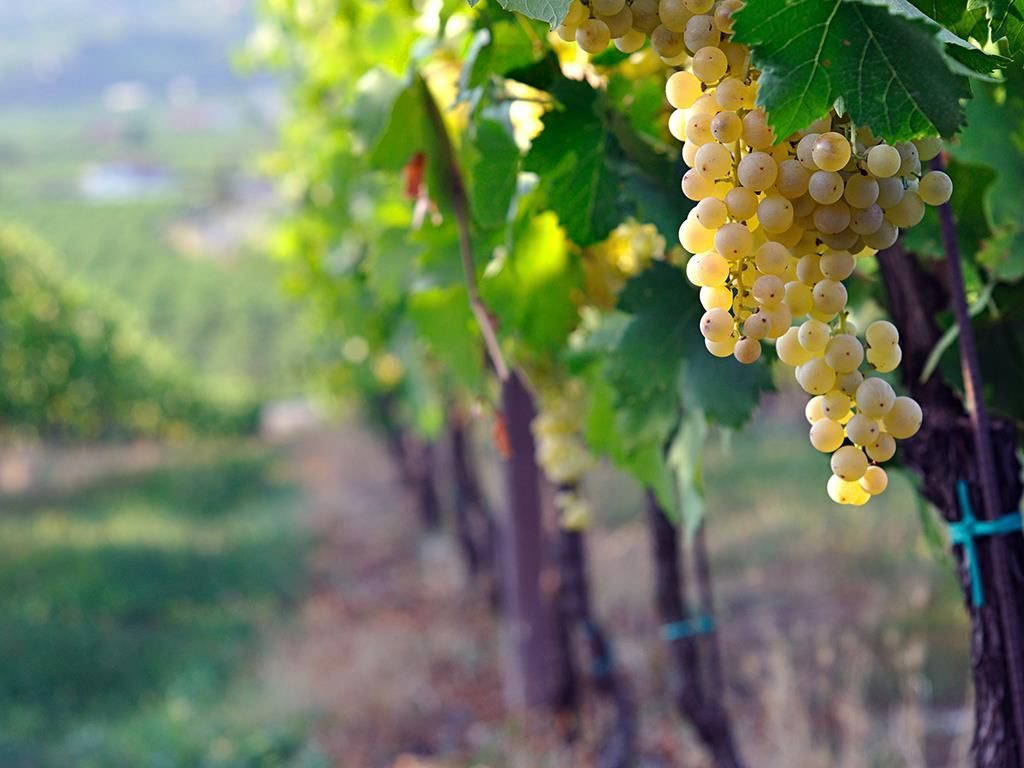 The strength of Lessini Durello Metodo Classico is certainly its strong personality, its unique soul, that make it recognisable and memorable. I appreciate its character especially when it comes to combining it with food: it is extraordinary both with raw fish and seafood dishes, and with more fatty and complex soups or seafood preparations. The perfect pairing to me however is a glass of Lessini Durello with two dishes deeply linked to the local tradition: the creamed cod in the Vicenza style (Baccala’ alla vicentina) and the sopressa, a typical salame, in particular the one seasoned in the Brenton caves, a hamlet of Roncà clinging to the slopes of the ancient extinct volcano of the Calvarina.

So if Durello is an example of delicious, food friendly Metodo Classico sparkling wine, a sort of Veneto champagne, why so few people know about it?

The problem is that no one has ever bet truly on the Lessini Durello DOC appellation, no one has ever believed in a serious project of promotion and quantitative growth for this denomination, which therefore now faces lacks of recognition and appreciation – as instead it absolutely deserves – as well as a production severely limited in numbers, which often does not cross the borders of the two production’s provinces.

A real shame, also because what I have recently tasted of this denomination has impressed me for its quality.

And if you need more arguments to the Durello’s case in advocating for your next wine trip to be in the Lessini area, here are some wineries and some touristic ideas to draft your itinerary. 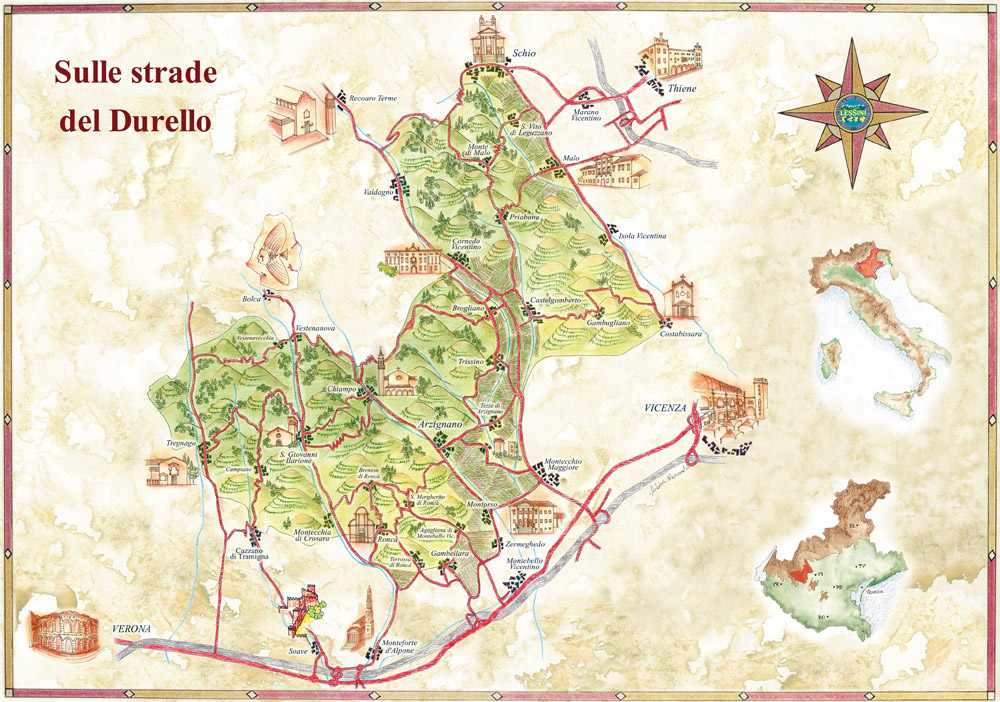 Fongaro winery was founded in 1975 from the hard work and from the passion of Guerrino Fongaro, who from the beginning chose to focus on the cultivation of the native vine Durella. He has been a pioneer of the Metodo Classico production in the area. A must try is the Lessini Durello M. Cl. Pas Dosé 2012 (if you can still find a bottle): it is a tense and nervous wine, with a long and pleasant sensation of citrus freshness, accompanied by a very fine sapid hint.

Gianni Tessari. After aging in the underground cellars on the lees for three years, the Lessini Durello “36 Mesi” Gianni Tessari, produced with Traditional method, learns perseverance. This wine has an incredible ability of being stable for a long time, the acidity helps the longevity, the lees makes it smooth and creamy but never too luscious. 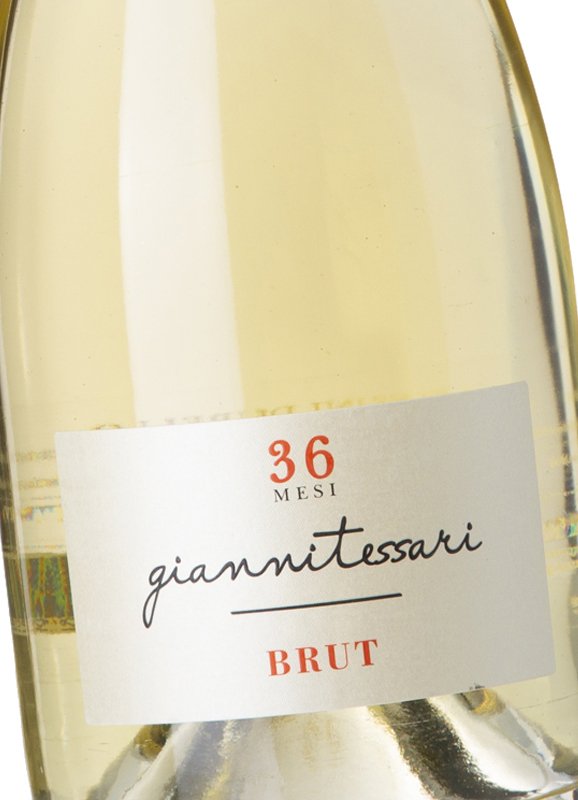 The “round” winery is a spectacular example of modern architecture well integrated in the beautiful landscape. It deserves a visit both for the place and the hospitality and for the well crafted wines. Try their Durello Lessini DOC brut, produced with grapes from one of the best spot of the entire wine region on the Mount Calvarina.

The 100 kilometer square protected area is an eco and adventure travelers’ dream with tons of adventure activities available all year long. With everything from Nordic walking to paragliding in summer and snowshoeing to kite snowboarding in the winter, it can be hard to chose what to see and do! Continue reading here 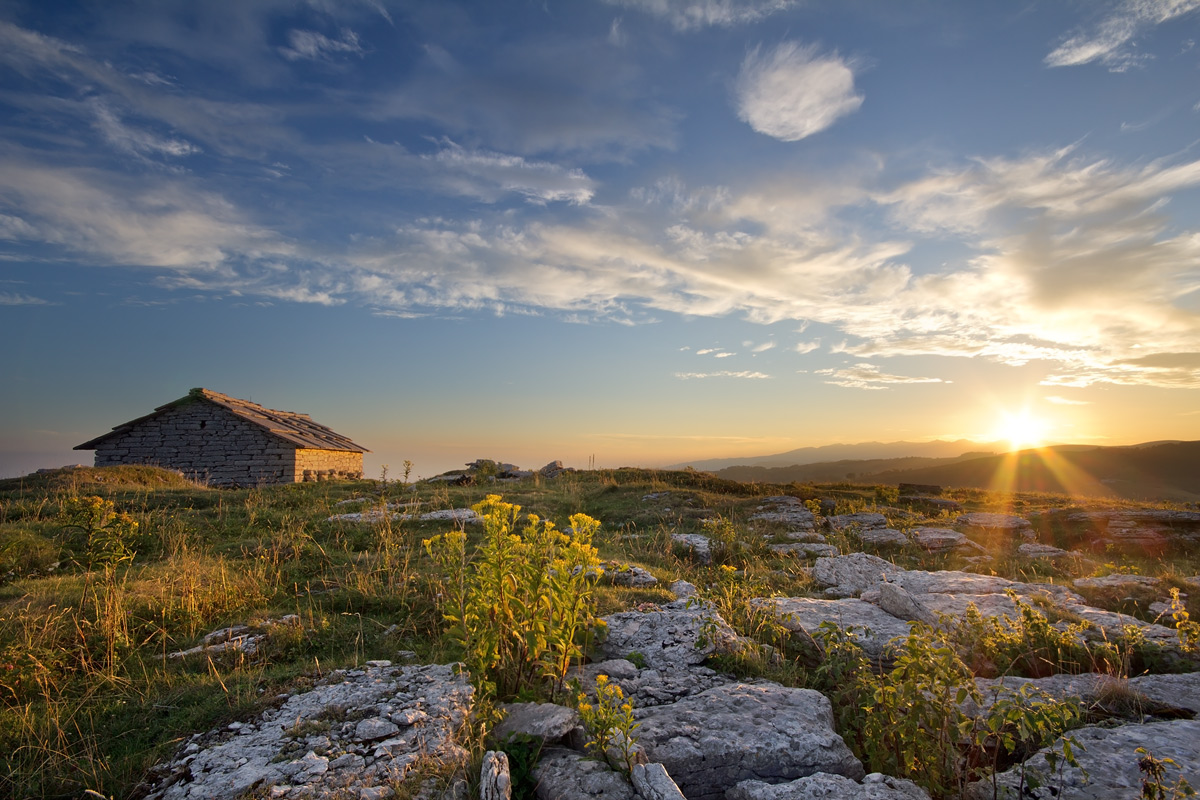 Although there are only around 120,000 residents, this is one of Italy’s wealthiest cities after Turin and Milan, and the elegant historic centre is full not just of ancient osterias, family-run trattorias and historic cafés, but also cool lounge bars, innovative gourmet restaurants and designer boutiques. Continue reading why you should visit Vicenza here 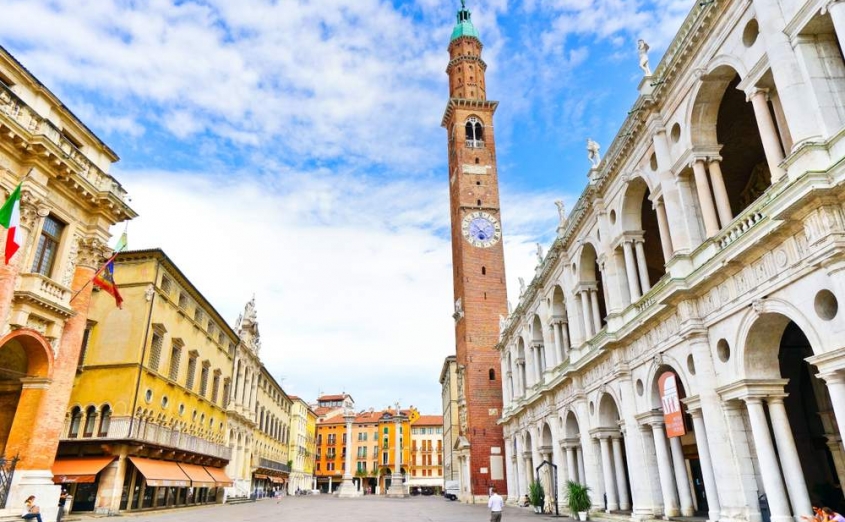 Bassano del Grappa sits charmingly on the banks of the river Brenta as it winds its way free from Alpine foothills through the Veneto plains to the Venetian lagoon. The town is famous for its namesake spirit, grappa – a distillation made from the discarded skins, pulp, seeds and stems of winemaking – although there is plenty to enjoy in this lovely Veneto town with its Palladian architecture and ancient historic core. Read more here 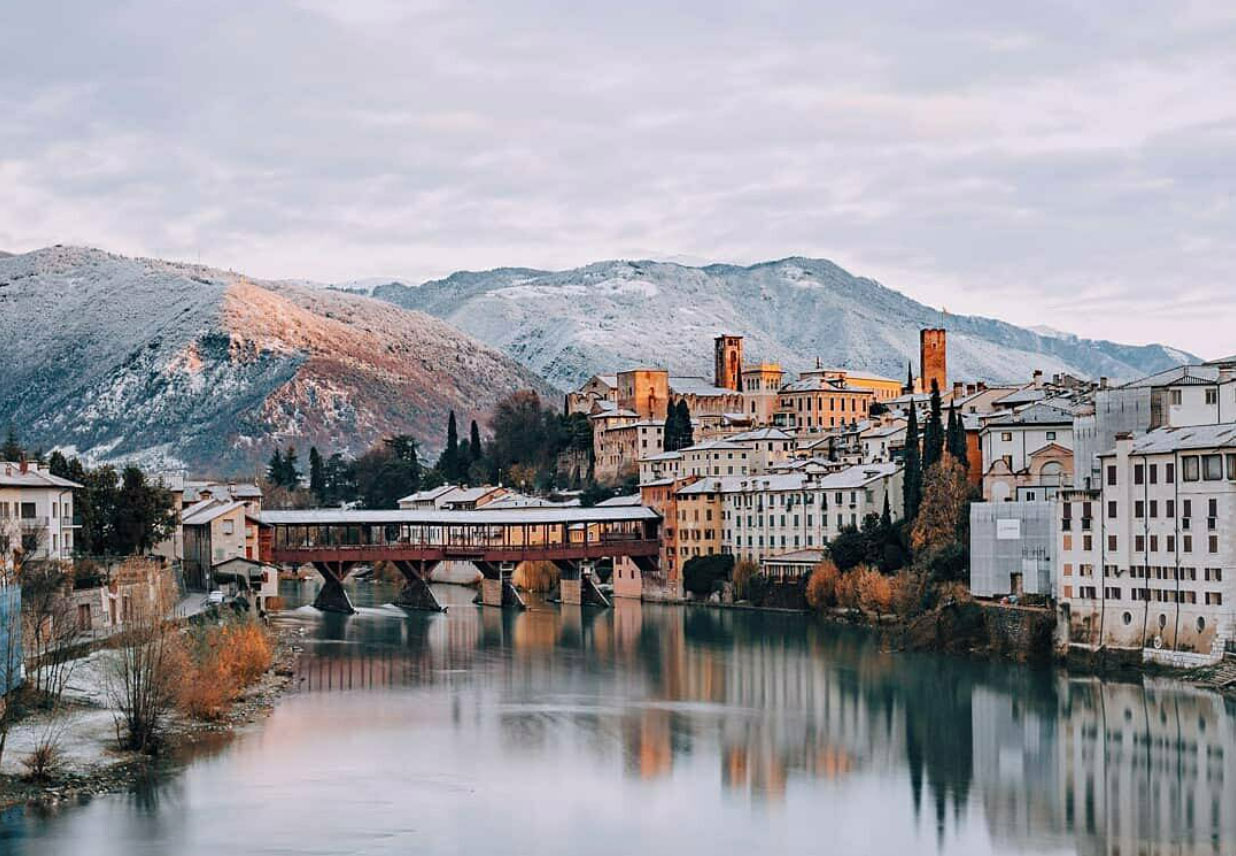